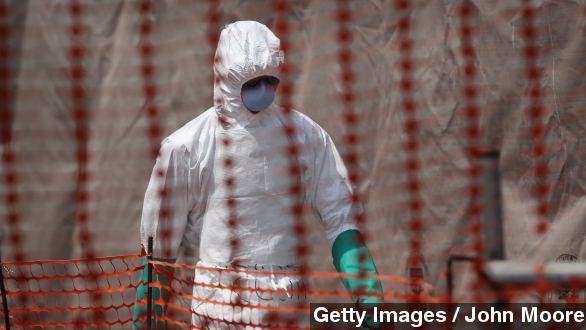 SMS
10 Aid Workers Return To U.S. For Ebola Monitoring
By Evan Thomas
By Evan Thomas
March 15, 2015
The workers do not appear to have symptoms of Ebola and are entering voluntary quarantine out of "an abundance of caution."
SHOW TRANSCRIPT

Ten Americans have been flown back into the U.S. from West Africa to be quarantined for possible exposure to Ebola.

The Centers for Disease Control and Prevention reports the aid workers took non commercial flights Saturday and will voluntarily quarantine themselves for the standard three-week period in housing near hospitals. (video via Fox News)

Partners in Health, the aid group the Americans were working with, says none of the ten are currently displaying any symptoms of Ebola. The safety measures are instead out of "an abundance of caution."

"But they're concerned enough about them that they've flown them back to the U.S., are watching them very closely, and then admitting them if they start to show symptoms," said CNN's Elizabeth Cohen.

All ten individuals worked with another Partners in Health volunteer who did contract Ebola and who arrived in the U.S. on Friday for treatment at the National Institutes of Health in Maryland. (Video via NBC)

That person's hospitalization brings the number of confirmed cases of Ebola the U.S. has seen to 11.

In Africa on Friday, deaths attributed to the outbreak passed 10,000 — more than 3,600 of them coming out of Sierra Leone.

The Washington Post characterizes the milestone as "bittersweet," though the worst Ebola outbreak in history, recent containment efforts have been successful in slowing the spread of the deadly virus.

According to data from the World Health Organization, Liberia has not seen a confirmed case for two consecutive weeks, but Guinea and Sierra Leone continue to report more than 50 new cases a week.

U.S. officials told The New York Times they might step up evacuation of aid workers, if the circumstances warrant it.