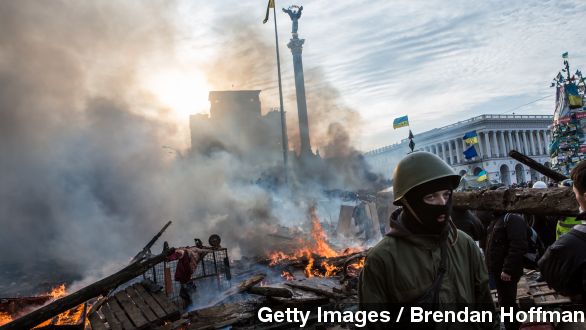 A year has passed since the nightmare that unfolded on the streets of Kiev. It's being remembered in very different ways in Russia and Ukraine.

Under the slogan, "We won't forget, we won't forgive!” thousands marched in Moscow Saturday to mark last year's protests and condemn the so-called “coup” that led to the overthrow of the country’s former pro-Russian President Viktor Yanukovych. (Video via RT, BBC)

That rally comes one day after a more somber crowd rallied in Kiev's central Independence Square to commemorate last year’s pro-democracy protests and remember those who died in the violence.

The bloodiest day of those protests was a year ago Friday when sniper fire killed more than 50 people. It’s still unclear who’s to blame for the mass shooting, but Ukraine’s new government alleges Yanukovych ordered police to open fire — an allegation he denies. (Video via Euronews)

So much has changed in just one year. The protests set off a deadly conflict between Ukraine and pro-Russian rebels that, according to the United Nations, has left over 5,000 dead and forced more than 1 million people to leave their homes. (Video via YouTube / National Separatist)

A cease-fire is currently underway in eastern Ukraine, but it started falling apart within days of both sides agreeing to it just over a week ago. Heavy shelling forced Ukrainian troops out of the key railway town of Debaltseve last week. (Video via Radio Free Europe / Radio Liberty)

France and Germany are threatening new sanctions against Russia if the cease-fire does not hold.