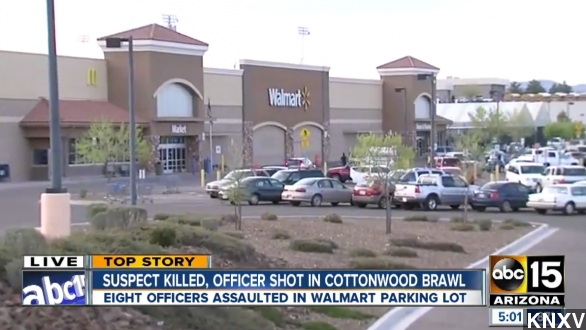 One suspect is dead, another is wounded and eight police officers were injured after a wild brawl in an Arizona Wal-Mart parking lot Saturday night.

According to the Arizona Department of Public Safety, police responded to a call claiming a female Wal-Mart employee was assaulted by several suspects inside the retail store. (Video via KTVK)

It all happened in the small town of Cottonwood, Arizona, about 100 miles north of Phoenix.

The same group reportedly attacked the police officers when both parties faced off in the parking lot, though it's still unclear what triggered the violence.

One witness described the violent free-for-all to WKBN: "I was here last night. I heard a lot of noise. It looked like a riot in the middle of the parking lot. It was unbelievable."

A DPS spokesperson told CNN officials think the suspects are all part of the same family. "We believe they are from Idaho because of the license plate on their vehicle."

Our partners at KNXV also described the surrounding environment.

"This Walmart parking lot in Cottonwood sometimes becomes an impromptu campground. ... According to one of the campers ... who was a witness here, the family that was involved in this ... they'd been staying here in the parking lot for several days, although he didn't know that there were nine people who were living in a Suburban," KNXV's Jon Erickson reports.

The DPS says all of the suspects have been taken into custody, and they're currently interviewing multiple witnesses. The DPS has also been asked to conduct a criminal investigation.

This video includes images from KNXV.