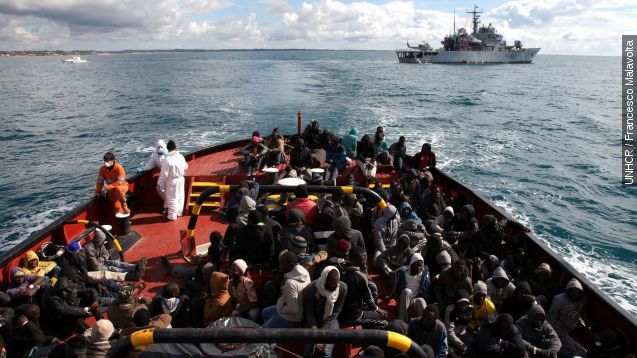 SMS
1 Million Refugees Came To Europe By Boat In 2015 — Half Were Syrians
By Jake Godin
By Jake Godin
December 30, 2015
The U.N.'s number of refugees for 2015 is sobering, but 2016 could be better if Europe coordinates more on the crisis.
SHOW TRANSCRIPT

According to the U.N. High Commissioner for Refugees, most came through Greece — about 850,000. The next highest number of refugee arrivals — 152,000 — were in Italy. Spain and Malta rounded off the rest with a little under 3,700 migrants and refugees entering those two countries.

Almost half of the refugees were fleeing the Syrian conflict. (Video via Syrian Civil Defense)

The second highest group were Afghan refugees, about 20 percent of the total. (Video via TOLONews)

And as the conflicts in these refugees' countries have become worse, fewer have been granted asylum.

Some barriers are literal: Countries are erecting fences to keep out refugees traveling into Europe by land. (Video via YouTube / NOL)

Other barriers are ideological. More and more people fear refugees may be extremist infiltrators.

"A complete and total shutdown of Muslims entering the United States," Donald Trump said at a campaign rally.

Though 2016 could be a better year for refugees. While Europe was initially caught off guard by the huge influx of migrants and refugees, the UNHCR says European nations are starting to coordinate their response.