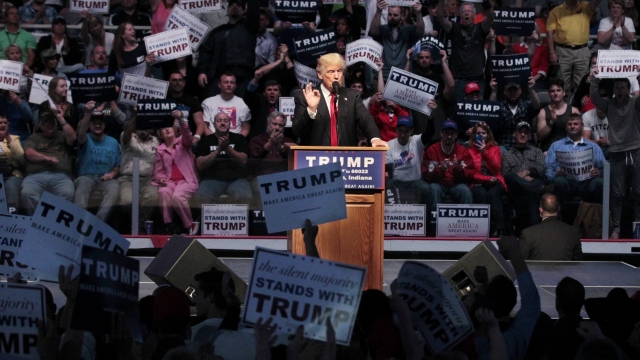 A protest outside a rally for Donald Trump in New Mexico turned violent Tuesday night.

Protesters threw rocks and bottles at police, set fires and broke a door at the Albuquerque Convention Center. Several police officers were struck by the rocks and needed to be treated for their injuries, according to a tweet from the Albuquerque Police Department. Police made at least one arrest.

Many of the protesters disagreed with Trump's views on immigration. The presumptive Republican presidential nominee is calling for the Mexican government to pay for construction of a wall along the U.S. border and has made controversial comments about illegal immigrants from Mexico.

Trump has also called for a ban on Muslims entering the U.S., but in recent weeks said it was "only a suggestion."

That rally will take place Wednesday at noon at the Anaheim Convention Center.

Meanwhile, Trump won Tuesday's Washington primary with more than 76 percent of the vote.

This video includes clips from NBC and Donald J. Trump for President Inc., and images from Getty Images.