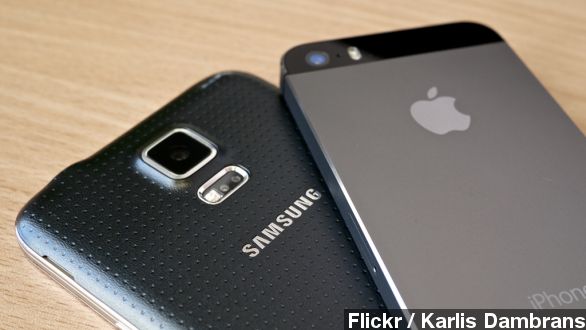 By Matt Picht
May 2, 2014
The ruling in the latest Apple v. Samsung patent suit found both companies had infringed on tech patents, but imposed relatively mild penalties.
SHOW TRANSCRIPT

Another lengthy legal battle between Apple and Samsung drew to a close Friday night, and the winner is ... well, it's complicated.

If this all sounds a bit like deja vu, that's because Apple and Samsung got into a very similar spat in 2012 over Apple's design and utility patents. That fight ended with a huge victory for Apple — Samsung was ordered to pay $1 billion to the Cupertino company. (Via The New York Times, Forbes)

But this time around, things didn't quite go all Apple's way. While the jury did award Apple $119 million in damages over two violated patents, that's far below the $2.2 billion figure the company sought. What's more, the jury also declared Apple infringed on one of Samsung's patents, awarding the Korean company a cool $158,000. Again, that's much less than the $6 million Samsung sought. (Via CNET)

Apple celebrated the court's decision in a statement to Re/Code, saying "Today’s ruling reinforces what courts around the world have already found: That Samsung willfully stole our ideas and copied our products."

But a writer for the San Jose Mercury News says Apple's long, drawn-out patent suits have already fallen behind Samsung's release lineup.  "As the second trial unfolded against smartphones such as the Galaxy S3, Samsung was releasing its latest smartphone, the Galaxy S5."

And as Ars Technica points out, the decision probably won't cause a lot of grief for either tech company. ​"Both companies have plenty of cash in the bank, and the markets have accounted for even worst-case scenario outcomes (which this didn't come close to.)"

The outcome is expected to be appealed by one side or the other — after all, the verdict from the first Apple v. Samsung case is currently being reviewed by a federal court.

Also following the verdict, Apple is likely to seek an injunction against the infringing Samsung devices, banning their sale in the U.S. But District Judge Lucy Koh, who is presiding over the case, has twice rejected similar requests in the past. (Via Los Angeles Times)

While the verdict is mostly settled, jurors are due back in court Monday to clarify an apparent error in the ruling. As the decision stands, Samsung has been ordered to pay exactly $0 for one specific patent infringement, a figure Apple called into question.