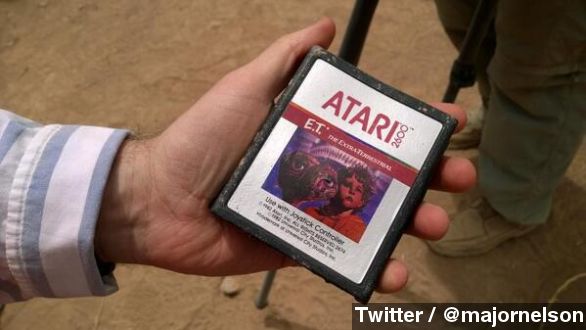 Film crews and excavators hit paydirt at an Alamagordo, New Mexico landfill Saturday as they discovered an "extra-terrestrial" piece of video game history.

"We found an intact 'E.T.' video game. ... 'E.T.' is definitely here. You didn't come out here for nothing and this wasn't a total waste of time." (Via Alamagordo Daily News / Alex Quintana)

Led by screenwriter and director Zak Penn, crews uncovered 30-year-old video game cartridges for the Atari 2600 — one of the first game consoles. Among the discarded treasure was what some consider the worst game ever made — "E.T. the Extra-Terrestrial." (Via Wired, Twitter / @stevetilley)

So, what are tons of antiquated cartridges doing in a New Mexico landfill? And why are people like Penn interested in them?

Well, as it turns out, the discovery is the conclusion of a 30-year-old urban legend that some call Atari's "corporate shame." Let's take a step back in time. (Via CNET)

The movie was released in June of that year and according to Mashable, "Atari rushed the game into production so it would be in toy stores for Christmas 1982. Howard Warsaw, the game's developer, says he only had five weeks to build the game — including the design."

Mashable reports Atari spent $125 million on "E.T." The failure of that game and other flops cost Atari $500 million in 1983 and is believed to be one element of the video game crash of 1983.

It was previously believed that Atari got rid of as many as 3.5 million unsold copies of the game. The New York Times reported in 1983, "The company has dumped 14 truckloads of discarded game cartridges and other computer equipment at the city landfill in Alamogordo, N.M. Guards kept reporters and spectators away from the area yesterday as workers poured concrete over the dumped merchandise."

Over the years, the story of Atari dumping millions of unsold copies of "E.T." became folklore with Warshaw telling A.V. Club in 2005 "I doubt that actually happened."

Fast-forward nearly a decade and Penn, along with Fuel Entertainment, Xbox Entertainment Studios and Lightbox partnered to make a documentary about Atari's fall and the mysterious burial of all those games.

And sure enough, they found what they were looking for — cartridges of the game, with some intact. And Warshaw, who once doubted the existence of all those games, was even on hand to see those recovered cartridges. He's the guy in the blue shirt. (Via Twitter / @majornelson, @zakpenn, @kobunheat)

The Alamagordo Daily News said the exact number of "E.T." cartridges is unknown, but previous reports put the estimate at 14-19 truckloads. The documentary on the excavation is expected to be released sometime this year.