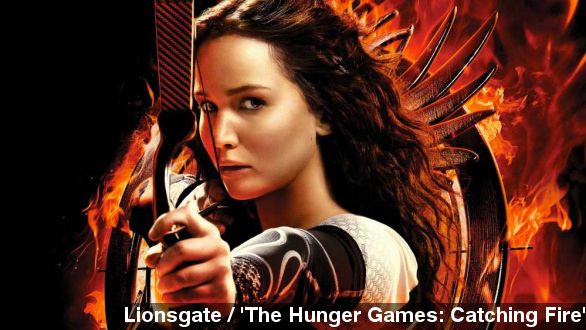 By Matt Picht
November 24, 2013
The second movie in &#039;The Hunger Games&#039; franchise broke the record for best November opening weekend ever.
SHOW TRANSCRIPT

"The Hunger Games: Catching Fire" hit the bullseye in theaters this weekend, breaking the record for best November opening ever.

The sequel to 2012's dystopian blood sport drama "The Hunger Games" raked in more than $161 million domestically, giving it the fourth best opening weekend of all time. (Via Lionsgate / "The Hunger Games: Catching Fire")

So, what's behind the film's blazing success? Entertainment Weekly notes "Catching Fire" drew in a more diverse audience than its predecessor, thanks in part to a broader marketing effort.

"Crowds over 25 and under 25 were evenly split, and although the film had more female viewers than males ... more men turned out on opening weekend than for the original Hunger Games."

The film was also bolstered by positive reviews, scoring an 89 percent approval rating on Rotten Tomatoes.

One critic for The Atlantic credits the franchise's new director Francis Lawrence for delivering "a film that is at once weightier and more nimble. ... Lawrence consistently maintains clarity and momentum."

And of course, there's the other Lawrence to consider. Oscar-winning actress Jennifer Lawrence's return to her role as protagonist Katniss Everdeen helped secure the top spot for "Catching Fire." (Via E!)

Lionsgate has announced the trilogy's final installment will cover two more movies, to be released in 2014 and 2015.