Zwarte Piet And The Dutch Holiday Tradition Of Blackface 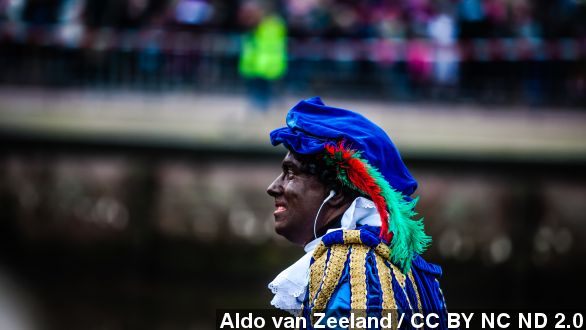 SMS
Zwarte Piet And The Dutch Holiday Tradition Of Blackface
By Jake Godin
By Jake Godin
December 23, 2014
The Dutch version of Santa Claus is traditionally accompanied by Zwarte Piet, or "Black Pete," a controversial helper in blackface.
SHOW TRANSCRIPT

Every year during the first week of December, the Dutch celebrate their own unique version of Christmas.

Who many know as Santa Claus, the Dutch call Sinterklaas.

Where Santa comes from the North Pole on a flying sled, his Dutch counterpart arrives from Spain in a steamboat.

And instead of having the squat elven helpers or reindeer commonly associated with Santa, Sinterklaas receives his help from ... Zwarte Piet.

Unsurprisingly, Zwarte Piet, or the English translation alternative, "Black Pete," is a pretty controversial figure to those unfamiliar with Dutch traditions. Especially in the U.S., where blackface is a little more than frowned upon.

Here's are Brits' reactions to the tradition, as captured in the documentary "Zwart als Roet":

"I don't know, we think it's a colonial hangover. We're scared of your tradition."

And similar responses in Alabama:

"I'm speechless at this point."

"It's offensive to us, with our culture being the way it is."

"I can't really get past that they are painted black."

"I know I'm not visiting Holland because of that."

But ask the Dutch about Black Pete and you get very different answers:

"Not everything has to be about discrimination. This is a good, nice thing."

"It is great for the children, and he is part of that."

So, where did this controversial Christmas character come from?

Well, the story of Black Pete begins in 1850, when he first appeared in the Dutch book "Saint Nicholas and his Servant" as a sort of Sinterklaas manservant-sidekick.

Somewhat like how Santa uses coal, Sinterklaas had Black Pete. But in this case, if a kid was naughty, he'd stuff you in a sack, hit you with a switch and then ship you off to Spain. Seriously.

This led to the more politically correct explanation that Black Pete's face was not naturally black, but instead dirty from chimney soot since he was going up and down chimneys to deliver presents. (Video via YouTube / Roel van Deursen)

But more than 150 years later, a growing number of Dutch citizens appear to have had enough and have begun picketing Sinterklaas festivals. (Video via RTL Nieuws)

A United Nations panel challenged the Dutch government to reconsider the custom in 2013. But this year a lower-court decision that would have allowed festivals including Black Pete be put up for review for negative stereotypes was overturned by the Netherlands' highest court. (Video via YouTube / taxi1108)

Theories for why the Dutch don't want to give up on the tradition of Black Pete range from cognitive dissonance, where the brain filters out information it'd rather not know, to ignorance on how big of a role the Netherlands played in the 18th and 17th century slave trade.

The most prominent supporters of Black Pete are members of the far-right anti-immigrant Dutch Party for Freedom, who this November proposed a law that'd protect Black Pete's identity — while, of course, dressed up as Black Pete.

But changes are slowly being made to the Sinterklaas helper nonetheless. A "White Pete" appeared in this year's annual Sinterklaas Journal, and some Petes are using ash on their face to more accurately represent chimney soot.

But for now, it seems those for and against the Dutch tradition of donning blackface to represent Zwarte Piet will continue butting heads for years to come. (Video via Media TV)