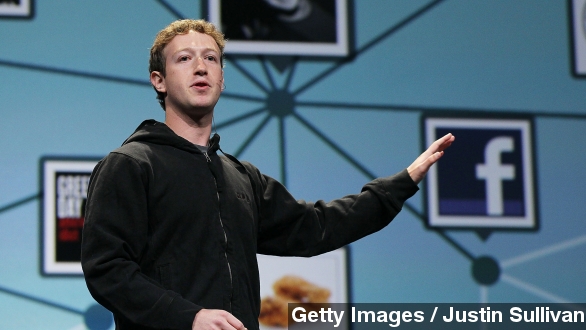 SMS
Zuck Asks Team To Read Chinese Propaganda To Impress Beijing
By Ben Lawson
By Ben Lawson
December 8, 2014
Some are calling Facebook head Mark Zuckerberg out for brown nosing after giving his employees copies of a book by the Chinese president.
SHOW TRANSCRIPT

Facebook founder Mark Zuckerberg has done nothing to hide his ambition of getting the company back into China, but his latest move is drawing accusations of, well, brown nosing.

That's because of this photo appearing on a Chinese-government-controlled website. It shows a copy of President Xi Jinping's book, "The Governance of China," conveniently sitting on Zuckerberg's desk when China's head Internet regulator toured Facebook's California campus last week.

"The Governance of China" is a collection of 79 speeches, interviews and talks given by Xi. It's described as providing insight into China's current foreign and domestic policies, but Quartz says it comes off more as "wooden propaganda."

Zuckerberg is quoted on the Chinese site saying: "I've also bought copies of this book for my colleagues. I want them to understand socialism with Chinese characteristics."

Currently, Facebook is on the wrong side of China's notorious Internet restrictions. The site has been banned in the country since 2009, and Instagram, another Facebook company, was blocked during the recent anti-government protests in Hong Kong.

Zuckerberg seems to be wooing the censors with a charm offensive; he made headlines in October when he spoke decent Mandarin during an interview in front of a Beijing university audience.

Mandarin is known for being extremely difficult to learn, so Zuckerberg was generally praised for taking on such a challenge in an attempt to earn favor for his company. But the book move isn't getting as cheerful a response.

The Washington Post writes, given the state of China's Internet, "The sight of Xi's book on a tech tycoon's table has been taken as hypocritical and absurd by many observers."

It's a view shared by an anti-Beijing activist who told The Telegraph: "Zuckerberg is an internet genius. ... Yet his understanding of Chinese politics is like that of a three-year-old not a 30-year-old."

For all the mockery, it's clear Zuckerberg desperately wants to curry favor with the Chinese government. If he's successful and Facebook returns to the country, it will have access to another 640 million Internet users ... and potential targets of ads.