'Zoolander 2' Promos Are More Realistic Than Most 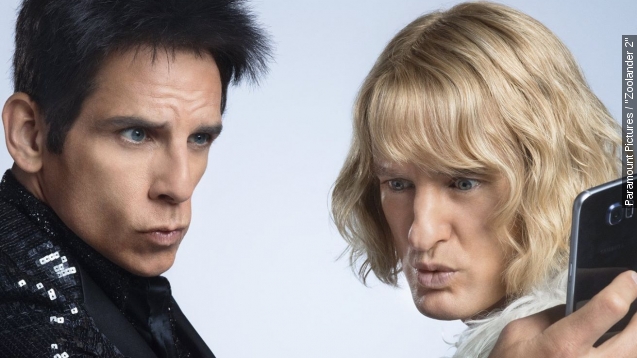 The "Zoolander 2" movie posters have officially dropped, and while one looks like a typical movie poster, the other looks more like a perfume ad.

Seriously, at first glance you might think this was some new campaign for a men's cologne.

Slowly but surely, the promotional efforts are starting to ramp up for the highly anticipated film, which hits theaters next year. But unlike blatant advertising, the film's characters Derek Zoolander and Hansel are embedding themselves into the real world.

And we love it. First, there were the Paris Fashion Week appearances. The two famous supermodels had a walk-off during the fall/winter Valentino show, proving that Owen Wilson and Ben Stiller can play the models in real life, too.

Not to mention the backstage meeting with Anna Wintour. Selfie stick and all.

Then there's Zoolander's newfound friendship with Justin Bieber. Bieber will be make a cameo in the upcoming film, so it makes sense that pouty faces are promoting his new album just days before its release.

For the five days leading up to the album's release, the Biebs has posted an image and video of Zoolander, who's is definitely in it for the Instagram followers.

"When my good friend Justin Blieber asked me to promote his album, 'Purpose,' I said, 'Of course.' Because I want more Instagram followers," Stiller said.

We even got a new look from Zoolander. Bye, Blue Steel!

"Hi, this is my new look, Purpose, produced by Skrillex," Stiller said.

I know you're going to watch that on repeat all day, which only heightens anticipation for both Bieb's album and "Zoolander 2."