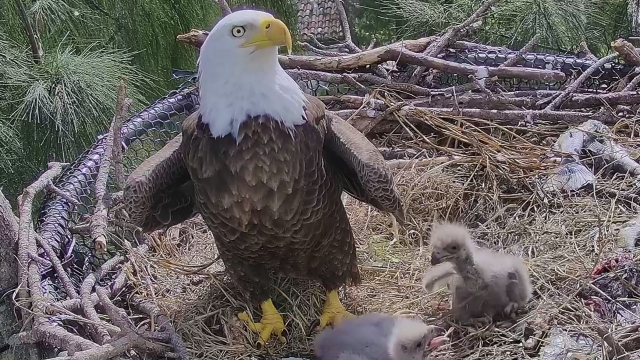 Ron and Rita received a new home and new eaglets after losing their nest and one little one last spring.

The return of the wild bald eagle population is a rare environmental success story.

In the 1970s, America’s national bird was nearly extinct thanks to pesticides that made their egg shells too weak.

Today, they’re thriving, but every once in a while, they can still use a little help. And in Florida, sometimes the difference between success and failure is the place eagle parents choose to call home, like the couple doing it all on camera.

Ron and Rita, a pair of bald eagles researchers say have been together since 2015, were displaced when a storm destroyed their nest last spring. Only one of their two eaglets survived.

"That nest was built on a tree that really isn’t a good eagle nest tree, so to speak," Ron Magill, communications director at Zoo Miami, said.

So Magill teamed up with a wildlife rescue group, and using a crane bucket, a couple two-by-fours and the frame of a Papasan chair, they built Ron and Rita a brand new nest. The question, however, was would they actually use it?

"A lot of eagle experts told us, 'Well that's not gonna work because once you put that stuff up there, they're gonna see it, they're gonna be afraid to never gonna go back to the tree.' Fortunately, that way, they were wrong," Magill said.

The Eagles came back, and Thanksgiving week, Rita laid her first egg in the new digs.

"It was just phenomenal," Magill said. "On Thanksgiving Eve we got to say what a great thing to give thanks for. She laid another egg shortly after that, and then shortly after that she laid a third egg, which is really kind of unusual because bald eagles usually only lay two eggs."

With live cameras spying on the nest 24/7, people around the globe started tuning in.

"I just got a video from Spain, where teachers in Spain start class in the morning by having their students look at the feed so they can learn about the behaviors," Magill said. "It's a great way to connect people around the world."

Ron and Rita are named after Magill and his wife. He’s worked at Zoo Miami for 42 years and also runs a conservation endowment that paid for the new nest and the cameras.

"I was very honored by the people at Audubon Eagle Watch, the people that Wildlife Rescue Dade County, that they chose to name these eagles after me and my wife," Magill said. "But at the same time, God, I hope they're good parents."

Sadly, the third chick did not survive, but the other two, dubbed R-1 and R-2, are thriving despite a touch of sibling rivalry.

"One of the biggest threats to eagle chicks is that they fight with each other," Magill said. "R-1 was beating the heck out of R-2. He'd just lay down and play dead, and R-2 two would wait for R-1 to be in a food coma and he’d lift up his head and look around and go, 'OK, now I can eat.'"

They might argue about where to put the furniture, but it turns out the feathered Ron and Rita are excellent parents, and the cameras are opening a window into eagle family life.

"It's important that we show people real nature that this is not just Disney Fantasy Land where everything is happily ever after," Magill said. "I think when people see the struggles and the commitment these parents have taking care of these chicks, God willing, the day those chicks fly off the nest, I'm gonna be full of tears. I'm gonna be like a little girl."