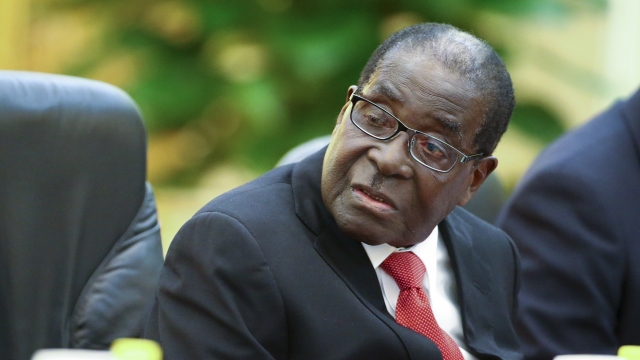 SMS
Zimbabwe's President Throws Luxurious Party Despite Country's Drought
By Melissa Prax
By Melissa Prax
February 28, 2016
Zimbabwe's president turned 92 and threw a bash with a hefty price tag. But some are concerned with how that looks in the face of widespread drought.
SHOW TRANSCRIPT

Any party that costs $800,000 will likely turn heads. But when you throw the party in a country lacking food and water, it will probably get criticism, too.

That's the case with Zimbabwe's President Robert Mugabe, whose 92nd birthday bash came with a hefty price tag, despite the country's drought that's considered a "state of disaster."

In a speech during the celebration, he said the government would continue to work to resolve the food shortage.

Mugabe, dubbed the world's oldest leader, has been Zimbabwe's president for the past 36 years and is known for residing during Zimbabwe's independence from Britain.

But some blame him for the food crisis, tying it to the economy, which took a major hit while he was in office. Only 25 percent of one of the country's main food products — maize — survived this season because of little water.

The country has been offered aid, but Mugabe is adamant on not taking donations from pro-gay rights countries.

As he gets older, people are looking for who will replace him as head of state — like his vice president. Or who knows, maybe one of the hundreds of thousands of other guests at the party.