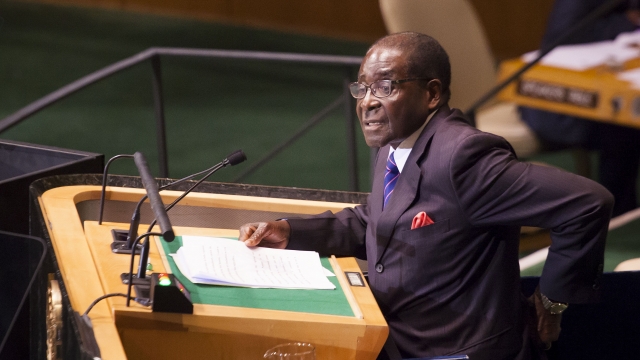 Robert Mugabe, the former president of Zimbabwe, has died at the age of 95.

His successor, President Emmerson Mnangagwa, confirmed Mugabe's death on Twitter Friday. Mnangagwa didn't provide any details, but Mugabe had previously been receiving treatment for months for an undisclosed illness at a Singapore hospital.

Born in 1924, Mugabe grew up in what was then Rhodesia. Much of his early adulthood was spent furthering his education and teaching others. But in 1960, he was imprisoned for 10 years for criticizing Rhodesia's white-minority government.

After his release, Mugabe helped spearhead his country's escape from British colonial rule, turning Rhodesia into the independent Republic of Zimbabwe.

Mugabe then quickly became Zimbabwe's first head of government in 1980 and ruled for decades. But during that time he became an international pariah for his ruthless, often violent oppression of dissent, and a land redistribution program that many blamed for the collapse of the country's economy.

But Mugabe's rule came to an end in 2017 after he fired his vice president, which many saw as an attempt to establish his wife Grace as his successor. This prompted Zimbabwe's military to take control of the country and Mugabe was forced to resign, leading to massive celebrations in the street.

Afterwards, Mugabe was rarely seen in public. He's survived by his wife, daughter, two sons and his step-son.