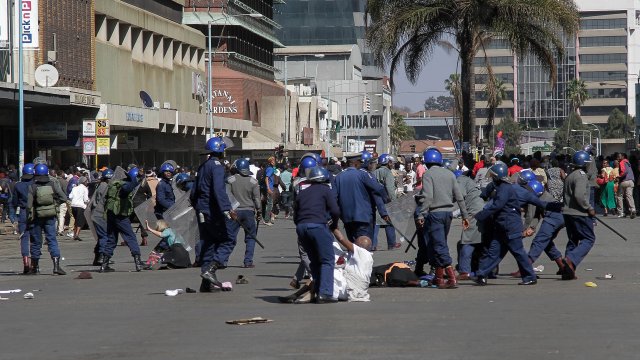 Movement for Democratic Change has another protest planned in Masvingo on Wednesday.

Tensions are on the rise between Zimbabwe's government and the country's main opposition party Movement for Democratic Change, as anti-government protests turn violent.

Witnesses say Zimbabwe police deployed hundreds of its force in Gweru, the next city MDC organized an anti-government demonstration. This would be the party's third attempt since Friday to organize, after police preemptively banned protests in the country's second-largest city, Bulawayo, and in the capital Harare.

Both led to clashes between protesters and police.

MDC challenged the bans, but a Zimbabwe court upheld the police's decision.

"Today the true color of the so-called new dispensation was exposed. The constitution guarantees the right to demonstrate, in terms of Section 59 of the constitution of Zimbabwe," Tendai Biti, secretary-general of Movement for Democratic Change said.

The party accuses the president of mishandling the economy.

The minister of foreign affairs said the country is "undertaking economic reforms," adding it's in the middle of a two-year "transition stabilization program" to spark the economy.

Zimbabwe is experiencing its worst financial crisis since 2008 due to issues like hyperinflation and decades of corruption.