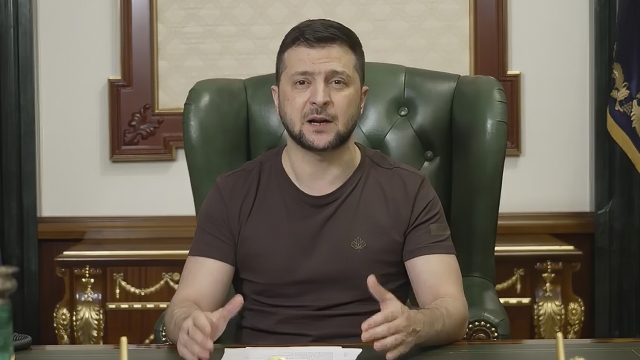 SMS
Zelenskyy Warns Of World War III If Russia-Ukraine Peace Talks Fail
By Newsy Staff
By Newsy Staff
March 20, 2022
“If there is just 1% chance for us to stop this war, we need to take this chance,” said Zelenskyy .

Ukrainian President Volodymyr Zelenskyy said Sunday he's ready to have direct talks with Russian President Vladimir Putin, and talked about the seriousness of the situation if the two sides can't agree to end this conflict.

“So, I think that we have to use any format, any chance in order to have a possibility of negotiating the possibility of talking to Putin. But if these attempts fail, that would mean that that this is a Third World War,” Zelenskyy said during an exclusive interview with CNN.

“I think that without negotiations we cannot end this war,” Zelenskyy added. “If there is just 1% chance for us to stop this war, we need to take this chance.”

Meanwhile, Ukrainian authorities said on Sunday that Russia's military bombed an art school sheltering some 400 people in the embattled port city of Mariupol, where Zelenskyy said an unrelenting Russian siege would be remembered for centuries to come, and accused Russia of war crimes over its siege, describing the attack on the city of 430,000 as “a terror that will be remembered for centuries to come.”

This is the second time in less than a week, Russia has attacked a civilian shelter, and the U.S. Defense secretary said Russia is resorting to "disgusting attacks on civilians because its invasion has stalled." Ten million people have now fled their homes in Ukraine since Russia's invasion, the United Nations refugees chief confirmed.

In his nightly address to the nation, Zelenskyy reiterated his earlier comments, and said Ukraine is interested in peace, and that ongoing talks with Russia are "necessary.”