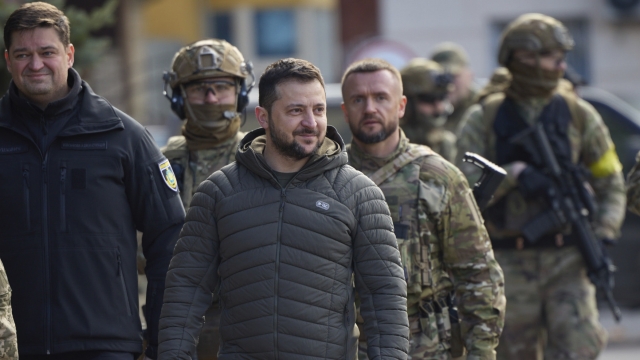 Kherson is still full of celebration after the Ukrainian city was liberated from the Russians. It happened much faster than anticipated. People traveled to the town square not expecting to see their president.

"You see the reaction of the people. People waited for the Ukrainian army," said President Volodymyr Zelenskyy.

Eugene Chykysh said he tried to keep a low profile, especially after the Russians tortured friends of his.

"Russian soldiers bought coffee in my shop. It was scary too," he said.

Ukrainian officials are already warning of war crimes, a mass burial site and torture chambers. The people of Kherson lived in terror for more than eight months.

NEWSY'S JASON BELLINI: After all of these months, how does it feel?

EUGENE CHYKYSH: Easy to breathe now. I feel this freedom from the bottom of my heart and I’m happy to see how many happy faces.

"When you go to the square and see Ukrainian soldiers, it’s a happiness that you can’t put into words,” she said. "Because we really waited for them."

BELLINI: Why didn’t you leave?

STABKEVIC: We have four dogs, four cats and two kittens. And we took care of our neighbors' pets.

Now, Ukrainian officials are suggesting that residents leave the city amid a growing humanitarian crisis: no power, no water, scarce food and medicine and little communication with the outside world.

Some people gathered around an electrical outlet connected to a generator. And also, thanks to Starlink, which provides internet service in remote locations, they’re able to connect with loved ones for the first time in quite some time. Though free, they remain isolated.

Newsy's crew saw the conditions along the road into Kherson during a bus ride in from Mykolaiv — checkpoint after checkpoint.

Long stretches of single-lane dirt roads were used to get around sections of highway demolished by shelling, and power lines were destroyed.

At one point, military escorts cut short a quick stop after an explosion in the distance. Upon entering the city, it appeared largely intact. Russian President Vladimir Putin’s plan was to make it forever Russian, rather than destroy it.

As Newsy's crew entered, billboards were being taken down — billboards put up by the Russians. One of them said "with Russia forever."

When the Newsy team arrived, local producer Dmytro Horyevoy reunited with his mother and 7-year-old brother who he had not seen since the invasion — nearly nine months ago. He left them food and water to help them get through the weeks ahead, as the humanitarian crisis sees no quick end.