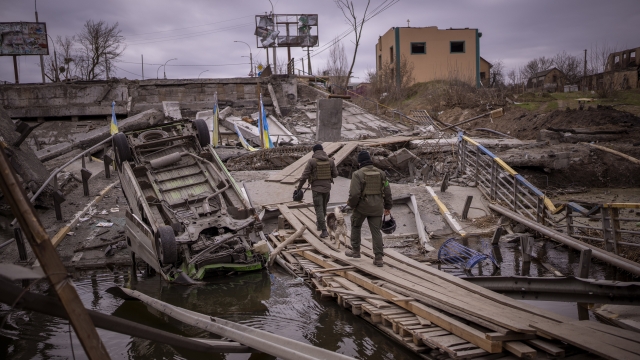 SMS
Zelenskyy Persuades A Vast Array Of Countries To Send Aid To Ukraine
By Sasha Ingber
By Sasha Ingber
April 21, 2022
In a matter of weeks, President Zelenskyy's pleas, shaming, and cajoling have persuaded nations to donate billions of dollars in military support.
SHOW TRANSCRIPT

"Those who have the weapons and ammunition we need and are holding back their help must know that the fate of this battle also depends on them. The fate of people who can be saved," he said.

Zelenskyy reportedly refused an ally's suggestion to flee Ukraine when Russia's brutal war started, saying, "I need ammunition, not a ride." He criticized the West for not sending enough weapons, saying countries were afraid of Russia. And he suggested the U.N. Security Council dissolve itself.

"Zelenskyy is being blunt, I think, in part because it's his style. And part of it, I also believe, is tactics," said Charles Kupchan, Former Senior Director for European Affairs on the National Security Council. "He may be deliberately asking for things that he doesn't really believe he's going to get as a way of putting additional pressure on Western governments to step up."

In a matter of weeks, Zelenskyy's pleas, shaming, and cajoling have persuaded nations to donate billions of dollars in military support.

"Today, I'm announcing another $800 million to further augment Ukraine's ability to fight in the East and the Donbas region," President Biden said.

In this latest shipment, howitzers and tactical vehicles to tow them and dozens of Phoenix Ghost drones. That's despite Russia warning the U.S. last week not to make "large-scale transfers of modern weaponry," in a diplomatic letter which Newsy obtained.

Zelenskyy has talked to nations from a bunker, from his office and from the streets of Kyiv — and it has paid off.

"President Zelenskyy has been so effective himself as a leader because he's using images, he's using information as a strategic weapon, really, to help people come to his cause," said Barry Pavel, Former Senior Director for Defense Policy and Strategy on the National Security Council.

Zelenskyy's pleas and the gruesome images of civilians tortured and killed have brought support beyond NATO countries. Australia has given Ukraine 20 Bushmaster armored combat vehicles, some repainted to show the Ukrainian flag. Japan is sending drones and masks and clothing to protect against chemical weapons.

As long as the war continues, the presidential persuasion and pledges keep coming.