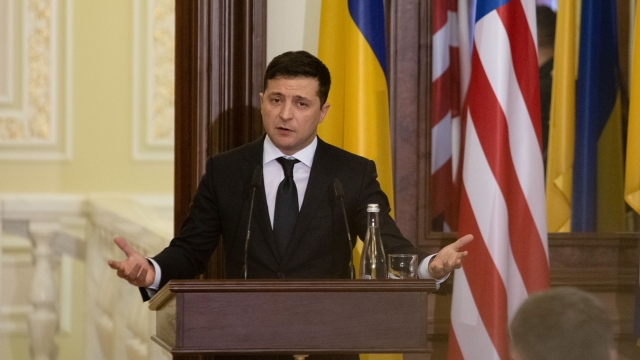 Zelenskyy said the U.S. president's claim in a November interview that Ukraine is the third most corrupt country in the world wasn't true.

Ukrainian President Volodymyr Zelenskyy is disputing a claim made by President Donald Trump that his country is one of the most corrupt in the world.

In an interview with CNN Saturday, Zelenskyy said the president's claim in a November interview with Fox News that Ukraine is the third-most corrupt country in the world wasn't true. The Ukraine leader says he personally told President Trump that "we fight with corruption. We fight each day."

Zelenskyy told CNN: "Please, please stop saying that Ukraine is a corrupt country, because from now, it's not true. We want to change this image."

This was Zelenskyy's first interview since President Trump's impeachment acquittal in early February. A July 25 call, in which the U.S. president solicited Zelenskyy's help in investigating former Vice President Joe Biden and his son, was a key piece of the impeachment trial.

Zelenskyy also said Ukraine has a very good relationship with the U.S. and that he is ready to talk with President Trump again.