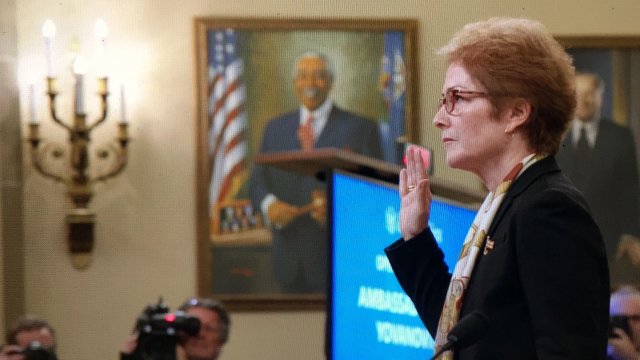 Former U.S. Ambassador to Ukraine Marie Yovanovitch told Congress and the American people the president has made her feel threatened and intimidated. She says that's true both in the past and on Friday, even as she spoke.

While Yovanovitch began her testimony, President Trump tweeted about her, saying in part: "Everywhere Marie Yovanovitch went turned bad. She started off in Somalia, how did that go?”

The No. 3 Republican in the House, Rep. Liz Cheney, said, "I don't think the president should have done that."

Yovanovitch, a 33-year veteran of the Foreign Service, also recounted her experience being recalled from her post as ambassador.

"How could our system fail like this? How is it that foreign corrupt interests could manipulate our government? Which country's interests are served when the very corrupt behavior we have been criticizing is allowed to prevail?" she said.

Republicans pointed to Yovanovitch's own statement that ambassadors serve at the pleasure of the president and say he had the right to remove her from her post. They also pointed out that she was not on the July phone call which sparked the original whistleblower complaint.

But Yovanovitch said she was removed from her post after a concerted effort led by the president's personal attorney Rudy Giuliani, based on false assumptions led a "smear campaign." She alleges corrupt actors targeted her as she fought corruption.

The public hearings will continue Tuesday, beginning with former State Department employee Jennifer Williams and Lt. Col. Alexander Vindman. In all, eight witnesses are set to answer questions in public during the week.