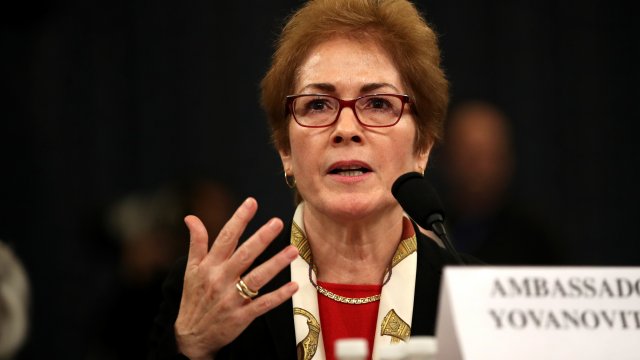 The Democratic counsel's questioning focused on detailing her decades-long career in the State Department, the events leading up to her sudden ouster earlier this year, and her reaction to the aftermath that followed.

"I was shocked and devastated that I would feature in a phone call between two heads of state in such a manner where President Trump said that I was 'bad news' to another world leader, and that I would be 'going through some things.' It was a terrible moment," Yovanovitch said.

"'She's gonna go through some things.' It didn't sound good. It sounded like a threat," Yovanovitch said.

House Intelligence Chairman Adam Schiff also asked her to respond in real time to comments President Donald Trump was making about her via Twitter.

"Would you like to respond to the president's attack that 'everywhere you went turned bad'?" Schiff asked.

"I mean, I don't think I have such powers," Yovanovitch said.

On the other hand, the GOP's questions seemed to focus on discrediting Yovanovitch's importance to the impeachment investigation.

"Not exactly sure what the ambassador is doing here today. This is the House Intelligence Committee that's now turned into the House Impeachment Committee," Rep. Devin Nunes said.

"Today is the second big hearing for the Democrats' impeachment initiative. But we do understand that you don't have a lot of facts and information relating to the part of this that we're investigating," GOP lawyer Stephen Castor said.

Yovanovitch's testimony was the only public hearing scheduled for Friday. Multiple other officials are scheduled to testify during open hearings next week, including EU Ambassador Gordon Sondland and Lt. Col. Alexander Vindman.