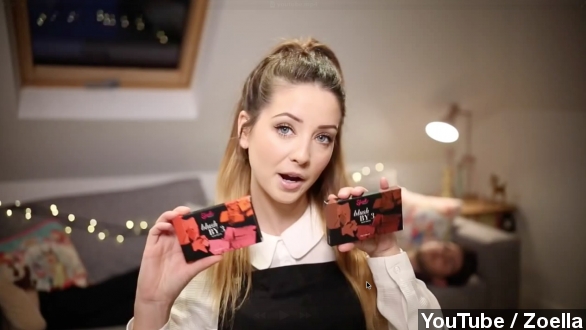 There's a new author at the top of the list for best first-week book sales for debut authors. That author? Well, she's a YouTube sensation.

"I don't have a lot of colors like this at the moment in my makeup collection," Zoe Sugg said in a recent YouTube video.

Perhaps taking a cue from her own life, Zoella's debut novel "Girl Online" is about a teenager who suddenly learns her personal blog has gone viral.

After its release Nov. 25, the book sold a total of 78,109 copies in its first week on the bookshelves. (Video via YouTube / MoreZoella)

That's a lot of books. It's a figure that's even more impressive when compared to some of the most popular authors' first-week debut novel sales.

Dan Brown and Stephenie Meyer fared even worse when their books hit U.K. bookshelves. Only 98 copies of Brown's "Angels and Demons" were purchased, and a measly 53 copies of Meyer's "Twilight" were sold.

Of course, those poor first week sales didn't stop any of the three books from being turned into highly successful novel and film franchises.

It's not difficult to see how Zoella got those high numbers, though. She has more than 9 million subscribers between her two YouTube channels.

And then she's got 2.59 million followers on Twitter, where she's been actively promoting her book. She recently tweeted: "I'm legit blown away by this. I never in a million years thought that so many of you would pick up a copy of Girl Online. Almost wanna cry."

And just last month she was featured in Band Aid's "Do They Know It's Christmas" with some other famous faces including Rita Ora, Ed Sheeran and Bono.

Zoella also has some pretty famous faces for friends: the guys of One Direction. She first interviewed them back in 2013 and has since been seen going to several of their concerts. So maybe a few 1D fans picked up her book as well.

Zoella joins quite a list of beauty bloggers who have found success outside of the Internet. Like Bethany Mota, who was most recently seen as a celebrity on "Dancing with the Stars," and Michelle Phan, who came out with a makeup line.

Zoella and her publisher are already planning a sequel for 2015.