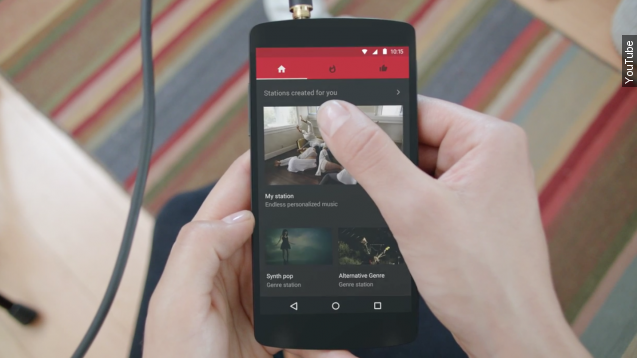 SMS
YouTube’s Music Catalog Might Supercharge Its New Music App
By Leah Becerra
By Leah Becerra
November 12, 2015
For a long time, YouTube has been the go-to for listening and watching music videos. That's why its new app makes sense.
SHOW TRANSCRIPT

YouTube wrote on its blog: "No matter where you start in the app, the music will never stop. Every song you play or artist you choose will take you on an endless journey through YouTube's music catalog."

Keep in mind, that catalog and the site's audience have been growing for years. Plus, if there's a song or music video on your mind that you don't already own, there's a pretty good chance you can find it on YouTube. (Video via YouTube)

Wired also points out, "While Taylor Swift once readily pulled her music off of platforms like Spotify and Apple Music (at least until Apple agreed to pay), she never made the same move on YouTube." (Video via Big Machine Records / Taylor Swift)

It's not just new music or even all popular music that YouTube offers, either. Live concerts, catchy digital shorts, classic tracks and mixes are all on the site. (Video via The Lonely Island)

If you're a YouTube Red subscriber, you already have commercial-free access to YouTube and Google Play Music. And now you'll get to listen to this new service without ads (even offline), too. That deal just keeps sounding better all the time. (Video via YouTube)