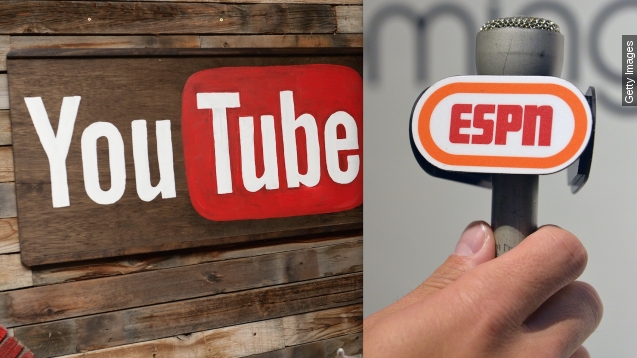 SMS
YouTube Plays Hardball With ESPN For Ad-Free Service
By Jamal Andress
By Jamal Andress
October 27, 2015
If you're a major partner who can't or won't agree to be a part of YouTube Red, then you're also not going to be on YouTube — that means you, ESPN.
SHOW TRANSCRIPT

The 3 million sports fans subscribed to ESPN's various YouTube channels are officially in the dark.

Tuesday, all content was wiped clean from all of ESPN's YouTube channels. The drastic move by the worldwide sports leader started last week and seemingly wrapped up on the eve of the YouTube Red launch.

YouTube Red is the company's new premium service that will allow users to watch YouTube videos without ads and save some videos to watch offline for a monthly fee of about $10.

While nearly 99 percent of YouTube's video creators have reportedly signed on for YouTube Red, including ESPN's parent company, Disney, ESPN hasn't joined in —yet. (Video via YouTube)

And YouTube has made it clear: If you're a major partner who can't or won't agree to be a part of YouTube Red, then you're also not going to be on YouTube — at all.

Google said in a statement, "It isn't fair to ask a fan to pay $9.99 for a service that has less content than a free service."

Hulu, on the other hand, had a similar problem with some high-profile shows (like "Scandal" and "New Girl") not signing on for its ad-free service, but instead of doing away with the shows altogether, it just displays a message explaining the show will still feature commercials.

So what's keeping ESPN from joining YouTube Red? Well, many have speculated it's because the network has so many other contracts to consider, mostly with major sports leagues and other distribution partners.

The NFL, which has a $15 billion contract with ESPN, the NBA and other major sports leagues is more stringent than most with its content.

Most of ESPN's most popular YouTube channels were companion sites for its shows. It's not as if those videos didn't exist elsewhere. The exception, Grantland, has moved its vids to its home site.