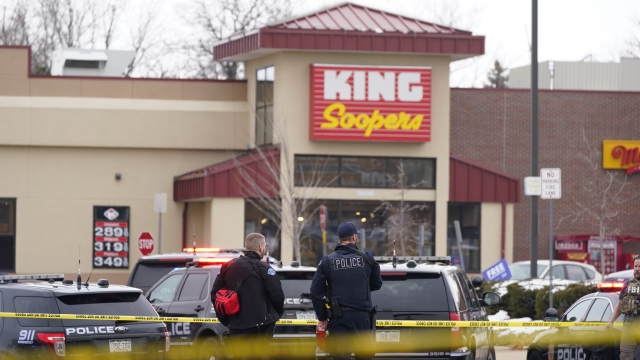 SMS
YouTube Leaves Up Live Stream Of Boulder, CO, Shooting
By Tyler Adkisson
By Tyler Adkisson
March 23, 2021
In a statement, YouTube said it would not immediately take the video down, and instead applied an age restriction to the video.
SHOW TRANSCRIPT

“We don’t know if there’s a shooter - active shooter somewhere.”

The live stream is graphic.

“Could be in the store.”

“Yeah he went in there.”

“He went in the store”

“He went right down there”

“Oh… my God. Guys, we got people down inside King Soopers.”

As television crews went live, tens of thousands of people turned to a YouTube live stream.

Behind a video camera, a self-described journalist named Dean Schiller is walking past bodies on the ground, showing the first police officers arrive, then continuing to feed video of the tactical response.

"Not entering yet… uh, take that back, smashing again,” Schiller can be heard saying.

Schiller appeared to be dangerously close as his feed racked up more and more viewers, his live stream available to anyone with the link.

“A fire truck is lifting SWAT guys onto the roof," Schiller said.

Schiller refused several police officer demands to move back. He was still feeding live video as a man, believed to be the shooter, walked out with his leg bleeding, and his clothes gone.

And once the live stream ended, that video stayed on YouTube, where it racked up hundreds of thousands more views.

In a statement, YouTube tells Newsy it won't remove the video, saying, "While violent content intended to shock or disgust viewers is not allowed on YouTube, we do allow videos with enough news or documentary context. We applied an age restriction to the content and will continue to monitor the situation."