Your Starbucks Water Might Have Come From Parched California 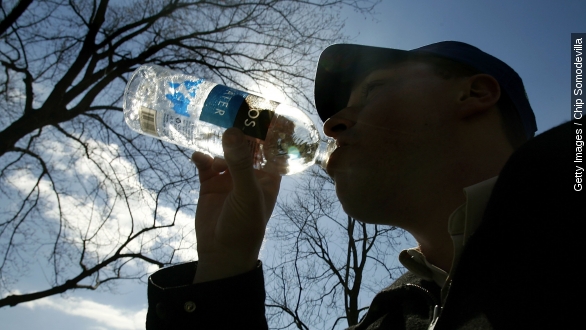 SMS
Your Starbucks Water Might Have Come From Parched California
By Jasmine Bailey
By Jasmine Bailey
May 1, 2015
A report from Mother Jones found Starbucks' Ethos Water comes from some of the areas hit hardest by California's drought, worrying residents.
SHOW TRANSCRIPT

Starbucks-owned Ethos Water gained success for its promise to "provide children with access to clean water," donating 5 cents to the cause for every bottle sold.

But as it turns out, that water Starbucks sells comes from one of the worst-hit areas in California's severe drought.

One place where the water is bottled in California is right around this area — Merced County, which is suffering from what authorities call "exceptional drought" conditions.

Now, just to be clear, the bottled-water plant in Merced County where Ethos Water comes from is actually owned and operated by grocery store chain Safeway. But Starbucks is still being blamed.

Anna Lenzer with Mother Jones talked to a Starbucks spokesman about its use of scarce water resources, and he replied that Starbucks uses "a private spring source that is not used for municipal water for any communities." But that doesn't pose any less of a problem.

KNBC reports, "The state's department of water resources says downstream communities could be affected because the water is captured before it actually makes its way to communities."

People who live in the area are worried the water could be coming from community supplies. But in California, data about the wells' locations and pumping rates is private information, making it difficult to pinpoint how much water is being used and from where.

In an effort to combat these issues, Merced County officials passed a historic proposal in March dealing with the use and sale of groundwater.

One consultant told KFSN: "If you propose to export water out of the county, you need a permit. If you overdraft groundwater on new wells, you'll need a permit."

"The ordinance will also require meters for new wells so the county can track usage," KFSN reports.

In addition to Starbucks and Safeway, some other big names are using California's precious resources. Bottled water companies Dasani, Arrowhead and Aquafina all have plants in some of the driest parts of the state.

According to the International Bottled Water Association, to bottle one liter of water, it takes on average 1.32 liters of water.