Your Engagement Ring Is A Pebble Compared To This Diamond 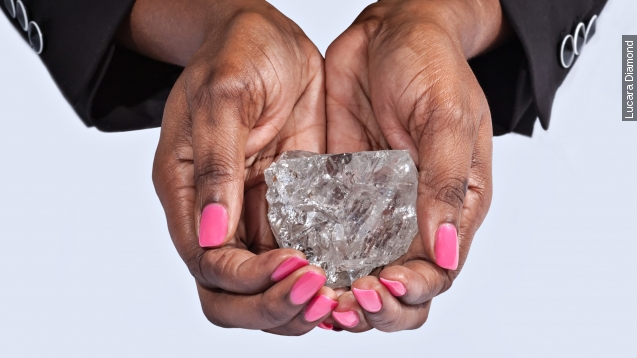 SMS
Your Engagement Ring Is A Pebble Compared To This Diamond
By Cody LaGrow
By Cody LaGrow
November 19, 2015
A mining company discovered a 1,111-carat diamond, the largest gem of the last century.
SHOW TRANSCRIPT

Shining, shimmering, splendid. This is a whole new rock and the second-largest gem quality diamond ever found in the world.

That's according to Lucara Diamond, the company that discovered this radiant rock in Botswana. The 1,111-carat diamond is the largest find in more than a century.

Lucara Diamond is finding quite the twinkling treasures. It recently discovered a 341.9-carat stone earlier in 2015, which sold for $20.6 million dollars.

Some analysts say it's impossible to estimate how much the second largest diamond ever will go for.

The largest diamond ever found was fit for royalty, and that was the 3,160-carat Cullinan diamond found in South Africa in 1905. That stunner was later cut up and placed in British Crown Jewels, giving new meaning to the term "ice queen."