Your Deodorant May Be Messing With Your Body's Microbes 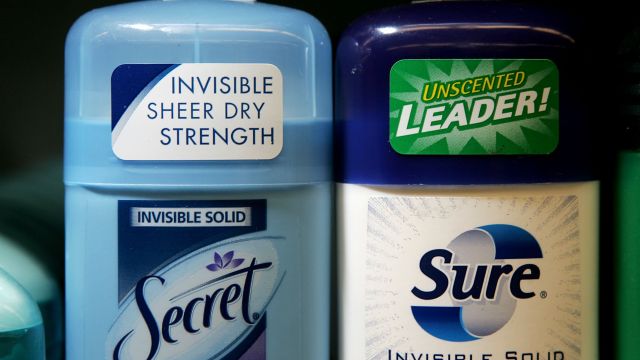 SMS
Your Deodorant May Be Messing With Your Body's Microbes
By Katie Link
By Katie Link
February 2, 2016
Deodorant keeps us smelling fresh, but it could also be messing with the natural microbes on our skin.
SHOW TRANSCRIPT

It comes in spray and stick, clear and extra-strength and dozens of different scents. But aside from keeping you smelling fresh and ready to work outside all day, it’s also messing with your body’s bacterial community.

At least, that’s what a group of researchers concluded after conducting a small study on the topic. The researchers wanted to find out how regular antiperspirant or deodorant application alters a person’s underarm microbe population.

By microbe population we mean the tiny bacteria, viruses and fungi that live on our skin and in our body. It’s normal — don’t freak out.

The co-author on the study, Julie Horvath, told Quartz: "When you have all these microbes on your skin, most of them are potentially beneficial or at least benign. They don’t do anything except for maybe create a protective barrier on your skin."

But after conducting an eight-day study, researchers found that protective barrier is changed by repeated use of products.

For eight days, a group of 17 men and women wore deodorant, antiperspirant or neither. After testing bacterial count for each group, researchers found people who wore antiperspirants had the most altered armpit bacterial communities.

But this doesn’t necessarily mean you should ditch the stuff just yet. According to Horvath: "It’s a balance. Wearing a product does affect the microbes under your arm, but what those short and long-term consequences are, we don’t really know yet."

This video includes images from Getty Images and Rich Anderson / CC BY SA 2.0.