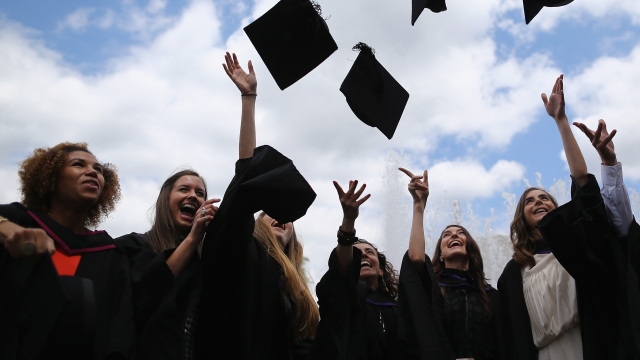 SMS
Young Women Are Asking For More Money At Work — And Getting It
By Jamal Andress
By Jamal Andress
April 12, 2016
A new study says young women entering certain fields are asking for more money than their male counterparts, and more importantly, they're getting it.
SHOW TRANSCRIPT

Young women entering the workforce are closing the gender pay gap — at least in some industries.

A new study based around tech, sales and marketing workers found that "women with under two years of experience are asking for an average 2% more compensation than men."

And more importantly, they're getting what they ask for.

Final offer salaries for these fresh-out-of-college women are 7 percent higher than they are for their male counterparts — which is in stark contrast to years of data showing women ask for (and receive) less than men.

In fact, women with more than four years of experience on average ask for 5 percent less than their male counterparts.

That said, a separate 2014 study found that 84 percent of the women who asked for a raise got one, but only 27 percent of women surveyed asked.

The author of the new study believes this data shows millennial women could finally put a dent in the the long-standing gender wage gap:

"This cohort—which is likely on the cusp of Generation Z and Millennial—have been raised at a time when traditional gender roles have had far less influence than in the past. ... Generation Z has a strong sense of self confidence and a strong belief in equal treatment."

Obviously, there's plenty more work to do — this same author also reports that among the entire workforce, men receive higher salary offers than women for the same job at the same company 69 percent of the time. And historically, the pay gap has been even greater for women of color, a factor the report didn't address.

But at least for young women entering the sales, tech and marketing industries, it seems the equal-pay-for-equal-work message has been received loud and clear.