Young Voters Say They're Ready To Have An Impact On Midterms 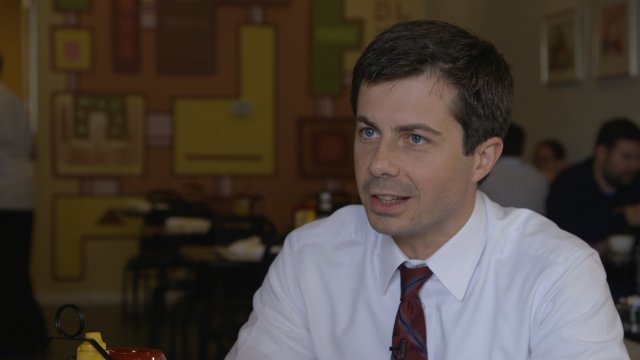 By Andrew Rafferty
October 25, 2018
Young voters say they're ready to show up on Election Day. But can the under 30 crowd really make an impact on the midterms?
SHOW TRANSCRIPT

"If you don't vote, for the purposes of people who make decisions about your life in Washington, you do not matter."

At 29 years old, he became the youngest mayor of a city with at least 100,000 residents. Since then he's run for chair of the Democratic National Committee. Now, at 36 years old, he's one of the party's rising stars.

And he's cautiously optimistic that the outpouring of energy from young people under President Donald Trump will translate to the ballot box this November.

"I've observed when I look at a lot of congressional campaigns we've been helping out, what you see is young people who are volunteering, knocking on doors, being engaged as best predictor if that generation's actually going to vote," said Buttigieg. "Historically, younger voters underperform, too, but the way in which you've seen younger people activated this cycle, I think does mean it has the potential to be different."

One of the safest bets in politics has been that the under-30 crowd does not turn up on Election Day.

Eighteen-to-29-year-olds have by far the lowest voter participation rates. About 46 percent voted in 2016, compared to about 61 percent of the total electorate. And while voting among all age groups decreases in the midterms, that's especially true for millennials. Less than 20 percent of Americans under 30 voted in 2014, according to the United States Election Project.

But there have been signs that 2018 could be different.

A handful of surveys have found enthusiasm among young people to be higher this electoral cycle than in the past.

A Tufts University-backed study of youth engagement in politics found 34 percent of 18-to-24-year-olds say they are "extremely likely" to vote in 2018 — a number that more closely resembles a presidential election than a midterm.

And they have ranked the top Senate and gubernatorial races where young people could have the biggest impact. On the list is the Indiana senate race — 17 percent of that state is between 18 and 29, and more than one-third remain in-state for college.

The contest between Democratic incumbent Joe Donnelly and Republican Mike Braun will be pivotal in determining which party controls the Senate.

"Are you guys going to vote?" Newsy asked.

"Are your friends going to vote?"

"I don't know if they'll be my friends if they don't vote."

College Democrats at Indiana University say they've seen a spike in interest from their peers. Their voter registration efforts throughout the fall have gone well, similar to trends seen around the country in the lead-up to November.

"With the election of Trump and all that has gone on since then, I have friends who never, ever cared about politics — couldn't tell you who their member of Congress was — texting me and asking me who they should vote for, what issues they should look into," said junior Jack Park.

That type of enthusiasm is why national groups like Acronym are engaging young people.

The progressive nonprofit's "Knock The Vote" campaign is focused on turning out young and minority voters who aren't typically courted by political parties.

And there's a reason so much of the focus on getting young voters to the polls has been on the left: Democrats enjoy a 27 point advantage among millennial voters, according to Pew.

But young Republicans say there's a wave of support that could surprise political watchers this November — just like it did two years ago.

"I definitely believe so," said the group's president, James Collins. "Especially with how active I have been, not only this campaign cycle, but I was highly active in the 2016 campaign cycle as well. A lot of the times you didn't really see it at rallies, but there was a majority of the youth vote that turned up at that time to support Trump and to support Republicans."

But the trend lines are clear: Trump received just 37 percent of millennial support in 2016. And the generational gap in party identification has only widened under his administration.

"I did get some bad looks when I came out as College Republican chair," said Collins. "Especially as a female on this campus, and especially during this administration, just because the rhetoric that has been spoken. But I will say there is support out there, and having a club like College Republicans allows you to feel that a little bit more."

And regardless of whom they vote for, the reality is that young people could be a serious electoral force if they chose to be. Millennials now rival Baby Boomers in occupying the largest share of the American electorate, according to Pew.

But that's of no consequence if they don't vote.

"The truth is it only matters if it happens on Election Day," said Buttigieg. "So young people need to not only raise their voice, but they need to flex some political muscle, and that's about to be tested. And so much depends on whether a new generation can establish itself as an electoral force. If they do, then everything else starts to change."