Here’s Why Young Voter Participation Is On The Rise 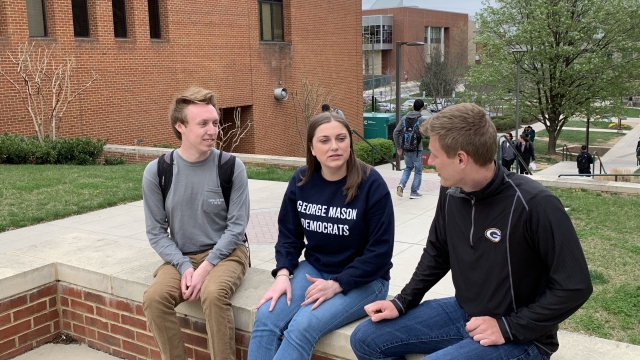 Celebrities used to be the main faces of voter outreach campaigns encouraging young people to vote.

"Don't just sit there let's get to it. Speak your mind there's nothing to it. Vote," said Madonna and two backup dancers during a 1990 Rock The Vote PSA.

Now there's been an increase in youth voter participation -- but friends are the ones sending the message.

" Rock The Vote back in the day really worked with celebrities and very public influencers to get young [people]  to raise awareness about voting and about civic matters but nowadays with the internet it's completely changed who influences young people," said Carolyn Dewitt, president and executive director of Rock The Vote. "So one of the biggest influences on a young person's participation is actually their peers."

"Today is the day. It's not just any Tuesday. Tuesday's are for voting." We may still see these celebrity PSAs used as outreach tools but organizations like Rock the Vote have more targeted plans to go where voters are including where they shop, work and live which giving them the knowledge about the electoral process to pass on to their friends.

Recent results for this approach have shown that it's working. Voters ranging in age from 18-29 turned out more this cycle than in 2014. The states marked here in dark blue had an 18 to 25 point increase in voter participation, according recent data from Tufts University.

With data from 34 states so far, overall young voter participation is estimated to be 31%, according to the report.

Virginia, like many states around the country saw an up-tick in young voter participation. Here on the campus of George Mason University, students tell me know matter how you vote you should go out and make your voice heard.

"With us all out [as] young people telling our fellow young people our fellow students like hey this is important you need to do this," said Kara Kline, president of the George Mason University Democrats. "It makes people really feel that sense of responsibility. It makes them want to vote. Because when you have a bunch of old people saying you need to vote it's important, that doesn't seem as cool when it's your friends and fellow students."

Peer to peer contact is just one factor that led to increased turnout. Experts point to a number of factors, including young people's attitudes towards the President, as a reason for the spike.

"2018 was so unique in many ways right," said Abby Kiesa, director of CIRCLE (Center for Information and Research on Civic Learning and Engagement) at the Tisch School of Public Policy, part of Tufts University. "We saw the first election after the election of a President who young people did not vote for. Some young people did, but not a majority of young people right. So that was a factor. We also saw a ramping up of the gun violence prevention movement."

Hunter Young typically leans right when voting and casted his first ballot during the 2018 midterms.He said he realized how important after seeing a close race in his hometown district.

"It really confuses me when people don't vote because like that's pretty much the most direct way we can influence our government," said Hunter Young, a student at George Mason University.

Voters and experts say they expect this renewed young voter enthusiasm will carry over into the 2020 presidential election.