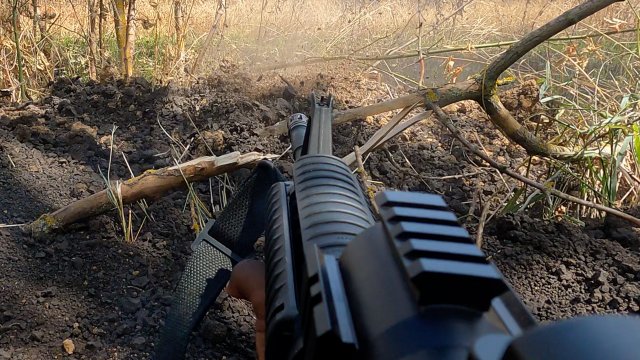 SMS
Young American Fighting in Ukraine GoPros War From Trenches
By Jason Bellini
By Jason Bellini
September 15, 2022
Newsy first met "Alex," who asked his real name not be used, back in May. He had come to Kyiv with a fellow foreign fighter.

This is the front line view from a trench in eastern Ukraine, seen through the GoPro camera of a 23-year-old American who does not speak the language of his fellow soldiers.

Newsy first met "Alex," who asked his real name not be used, back in May. He had come to Kyiv with a fellow foreign fighter. The day after this interview, he headed east alone to join a mostly-Ukranian army unit.

In the months that ensued he fought in Kharkiv and then the Donbas region, and as part of the larger fighting force in the lightning counteroffensive.

Alex stopped in Kyiv again for a few hours on his way to meet up with a special unit.

NEWSY'S JASON BELLINI: I know you don't want to talk about where you're going next, what you're doing next. What do you think the next few weeks are going to be like for you?

ALEX: More battle, more like this unit in particular, these people fight and these people they get their hands dirty. And that's what I want to get in.

In other words, less time in the trenches, where he fires at an enemy he rarely and barely sees, while being hunted by and hiding from enemy artillery.

BELLINI: As a young foreigner, do you feel like they treat you well, treat you with respect?

ALEX: It has its days. We all, you know, poke fun at each other,  the usual… it's a brotherhood.

BELLINI: Some of the brothers that you showed me in that video, you said they're no longer with us.

ALEX: They were given another objective to take. We were separated from my outfit.

BELLINI: How did you find out they were dead?

A few weeks ago, Alex shared photos of the tank in which he was asked to perform a grim duty.

ALEX: The sergeant pulled me over and said, 'hey, I need some help moving bodies.' I was like, 'all right.' Inside the tank was the body of a sergeant. A Ukrainian sergeant.

It was someone he had met before, who had thanked Alex for his service in Ukraine.

BELLINI: And you pulled him out of the tank?

ALEX: He was in pieces.

ALEX: It is what you- [he struggles for words]

Beyond words — six months and 5,700 miles away from home.

BELLINI: How much longer you think you're going to be here?