You Could Buy The Playboy Mansion (And Hugh Hefner) For $200M 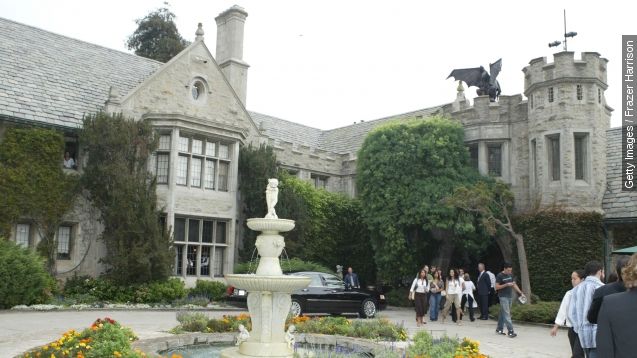 SMS
You Could Buy The Playboy Mansion (And Hugh Hefner) For $200M
By Ryan Biek
By Ryan Biek
January 10, 2016
The famous, or infamous, home could be on the market within the next month, according to TMZ.
SHOW TRANSCRIPT

One of the most iconic homes in Holmby Hills might be up for sale soon. Although, you'll have to share it.

TMZ reports the Playboy Mansion is set to be listed sometime within the next month for more than $200 million. The new owner would be required to let the magazine's founder, Hugh Hefner, live in the mansion until his death. (Videos via Playboy, MTV and ABC)

TMZ's, albeit anonymous, source says the real worth is in the land, but the mansion's history could help it bring in $90 million — less than half of the reported advertised price.

In 2011, Hefner estimated the house’s value at $1.2 million, but Playboy Enterprise shareholders said it was worth $54 million. Hefner bought the house for $1 million in 1971. (Videos via Playboy and MTV)

As for those supposedly wild parties — the new owner would likely have to throw his or her own. (Video via Playboy)