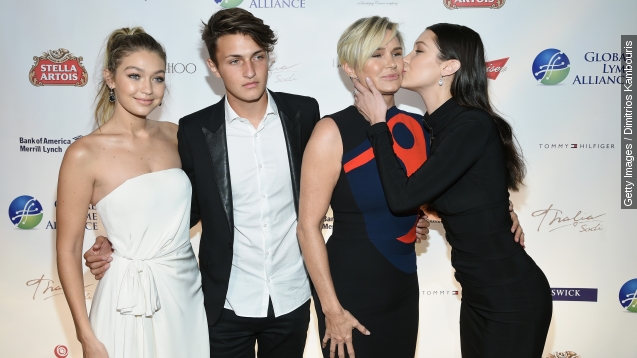 "Real Housewives of Beverly Hills" star Yolanda Foster has been searching the globe for a Lyme disease cure for years now. Her Instagram documents her personal struggle with the debilitating disease.

"I went from being an outspoken, multitasking social butterfly to being trapped in a mentally paralyzed cocoon," Foster said at a 2013 event to raise awareness for Lyme disease.

Joining her in her struggle are her two children, son Anwar, and daughter, supermodel Bella Hadid. The reality star revealed they, too, have struggled in silence with Lyme disease for nearly three years.

At the Global Lyme Alliance Gala where Foster received the "Power of One" award, she dedicated it to her children, saying, "This is my token and my promise to you that I will not allow you to live a life of pain and suffering. I will walk to the end of the earth to find a cure so that you can live a healthy life that you deserve."

"These are all of the pills that I take. This is one day of just my vitamins. It's such a lonely disease and it's so silent," Foster told ABC.

Lyme disease is carried by ticks. Once bitten, infection can attack the skin, joints, heart and nervous system.

In the last year, singer Debbie Gibson opened up about her struggle with Lyme disease, as did Avril Lavigne, who was misdiagnosed several times. (Video via RCA Records / Avril Lavigne)

"This is what they do to a lot of people that have Lyme disease. They don't have an answer for them, so they tell them, 'You're crazy,'" Lavigne explained to ABC.

Now, two young faces join the more than 30,000 people who get Lyme disease each year. Bella, emerging as a top model during her struggle. And Anwar doesn't seem to be too far behind.