Yoga Could Be As Beneficial For The Heart As Walking, Biking 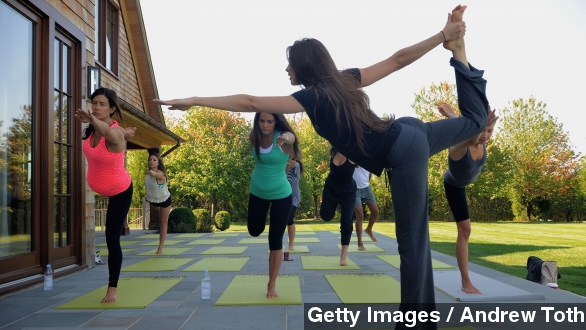 SMS
Yoga Could Be As Beneficial For The Heart As Walking, Biking
By Matt Moreno
By Matt Moreno
December 17, 2014
Yoga can help your weight, blood pressure, cholesterol and heart just as much as biking and walking does, a new study suggests.
SHOW TRANSCRIPT

Good for the mind and good for the body. Scientists say doing yoga can improve your weight, blood pressure, cholesterol and, most importantly, your heart.

The health benefits of yoga have long been known, but a review of 37 previous studies claims it can be just as effective as biking and walking.

One lead researcher of the study, Paula Chu says, "This finding suggests that [people] who are physically limited in some way do not have to 'pound the pavement' in order to improve their cardiovascular risk profile."

The study was published in the European Journal of Preventive Cardiology and shows both healthy people and those with health risks saw similar benefits from yoga.

Researchers believe yoga's health benefits might come from a reduction in stress.

The American Heart Association says stress can lead to an increased heart disease risk and high blood pressure and cholesterol levels. It can also affect eating, drinking and smoking habits.

Yoga is becoming more and more popular in the U.S. A 2012 study by Yoga Journal found about 20.4 million Americans practiced yoga nationwide, up from an estimated 15.8 million four years prior.

And Women's Health points out there are plenty of different styles of yoga to choose from.

Still, even though the study looked at about 2,800 people, the researchers say not to draw any "definitive conclusions" from the study, mainly because there are so many different forms of yoga. The amount of practice needed for these health benefits to happen is also a factor.