Yes, The Air Guitar World Championships Are A Real Thing 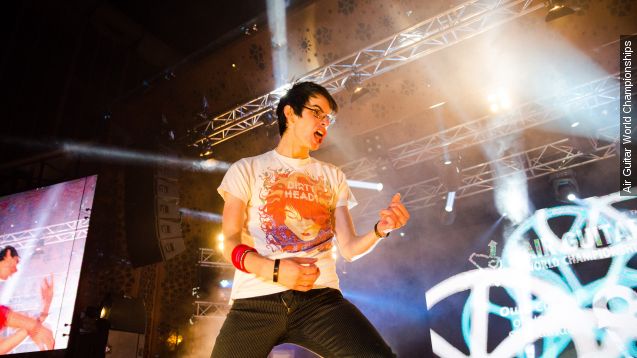 SMS
Yes, The Air Guitar World Championships Are A Real Thing
By Jamal Andress
By Jamal Andress
August 26, 2015
Since 1996, nerds the world over have been meeting in Finland to rock out with lots of enthusiasm and no actual talent. This year is no different.
SHOW TRANSCRIPT

With the mission statement "Embracing Absurdity," the World Air Guitar Championships celebrates its 20th year of existence, and who wins and who loses on this very unlikely anniversary is just as inconsequential now as it has ever been.

Since 1996, nerds the world over have been meeting in Oulu, Finland, to rock out with lots of enthusiasm and no actual talent. And this year is no different. From Aug. 26 to Aug. 28, the national champions from 20 different countries will meet to compete in the world championships.

And, yes, there are 20 different countries that hold separate air guitar championships.

"We just thought we were gonna get drunk and videotape ourselves being kinda crazy," said David "C-Diddy" Jung.

One could argue that still happened.

In the U.S., Belgium, Denmark, France, Japan and other countries around the world, there is a local competition, similar to the world championships, where a national champion is crowned. Then, that champion moves on to compete in Finland.

Along with the main event, the French Air Band, Airnadette (the real professionals) will be holding a musical comedy.

And whatever this is.