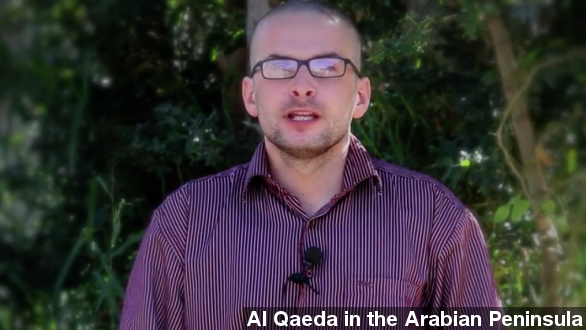 An Al-Qaeda affiliate based out of Yemen released a video Wednesday evening threatening to kill an American journalist by the end of the week if the U.S. doesn’t meet its demands.

Asking for help, the hostage identifies himself as Luke Somers, a 33-year-old British-born American who was kidnapped over a year ago. (Video via YouTube / ع مجاهد)

According to the National Yemen Newspaper, Somers had worked at multiple Yemeni newspapers and was an active photojournalist during the country’s 2011 revolution. When he was kidnapped in 2013, he was working as a translator. (Video via YouTube / قناة ppryemen)

The hostage video was released by Al-Qaeda in the Arabian Peninsula, or AQAP. An official within the group speaking in the first half of the video condemns U.S. operations in Yemen, Iraq and Syria.

An English translation posted by the group warns that Somers will “meet his inevitable fate” if their demands aren’t met. It’s unclear what exactly those demands are. (Video via YouTube / ع مجاهد)

The AQAP spokesperson also references a joint U.S.-Yemeni military commando operation in an eastern Yemeni province. The operation was carried out in late November in an attempt to free hostages.

According to The New York Times, eight hostages were freed during the operation. Six were from Yemen, one from Saudi Arabia and one from Ethiopia. Three other hostages including an American and Briton were reportedly moved before the raid.

While official U.S. policy bars any negotiation with terrorist organizations, its possible officials may consider another prisoner swap reminiscent to the release of Sgt. Bowe Bergdahl by the Taliban earlier this Spring. (Video via The Telegraph / Taliban video)

Earlier in November, President Barack Obama ordered a comprehensive review of the U.S.’s hostage policies. So far, the U.S. government has made no statement in regards to this latest video.