Saudi Prince Visits The US To Polish His Country's Image 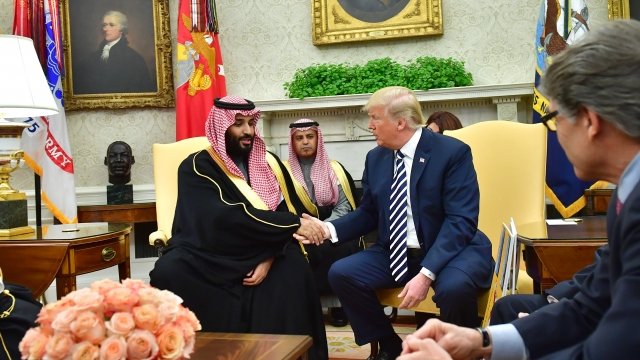 Saudi Arabia's Crown Prince Mohammed bin Salman is visiting the U.S. to promote his vision of Saudi Arabia's future. And Congress is making sure Salman has his work cut out for him.

Salman's two-week stay in the U.S. includes a meeting with President Donald Trump and with U.S. business and tech leaders. The crown prince is trying to attract investment and good publicity for the kingdom.

But during Salman's visit, a bipartisan group of senators is demanding a vote to end U.S. support for the Saudi campaign against Yemen's Houthi rebel group. Saudi Arabia has been accused of exacerbating Yemen's severe humanitarian crisis by bombing civilian targets and blocking supplies from entering the country.

The proposal faces an uncertain future, but it highlights one of several black marks against the kingdom that could turn Salman's charm offensive into an uphill climb. 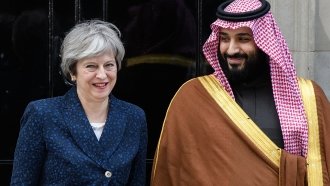 Salman is typically seen as a reformer seeking to modernize Saudi Arabia's repressive government. Under his direction, Saudi Arabia has relaxed a national ban on cinemas and rolled back several of the country's restrictions on women's rights.

And Salman is keen to promote those reforms while in the U.S. He told CBS' "60 Minutes" that women should be equal to men and suggested the traditional black abaya clothing wasn't required by the country's Sharia law.

But the crown prince's rise to power has also led to a more aggressive Saudi foreign policy in Yemen and elsewhere. The White House says it plans to press Salman to quickly resolve the ongoing Saudi-led blockade of Qatar, which has pit the two U.S. allies against each other since last June.

Ultimately, mutual dependence will probably keep U.S. and Saudi relations as strong as ever. The U.S. still values Saudi Arabia's ability to counter Iranian influence in the region, while Salman is hoping U.S. investment can help diversify his country's oil-dependent economy.