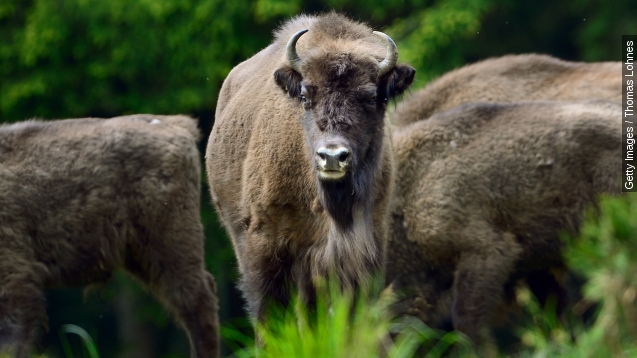 Yellowstone National Park might have to kill about 1,000 bison this winter to restrict the animals' migration into Montana.

Park officials are talking with the federal government and American Indian tribes to deal with the growing numbers of bison venturing outside the protected borders of the park.

The crux of the problem lies with the possible transmission of brucellosis from bison to cattle; the disease can cause cattle to accidentally lose their calves. (Video via Brand USA)

In order to stop this, each year as the species cross park borders, officials round up a certain percentage for research or slaughter. American Indian tribes and other hunters also help curb the population.

This idea isn't new. Yellowstone has been dealing with bison migration since Montana and the federal government reached an agreement in 2000.

Yellowstone currently has the world's largest wild herd of bison with almost 5,000 accounted for this summer, and attempts to relocate parts of the population have met resistance from landowners scared about the spread of the disease.

A spokesperson for Yellowstone National Park told KTVQ that the exact number of bison considered in the plan has not yet been approved.

This video includes images from Getty Images and the U.S. National Park Service.