Yellowstone Park Closed To Visitors Due To Severe Flooding 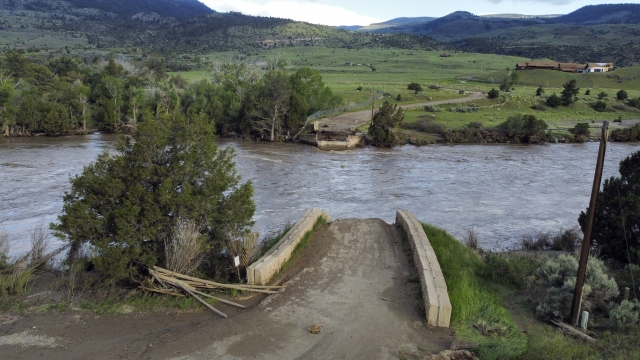 Videos are making it clear that the northern loop of the park will not reopen this year, due to severe flooding.

"A little bit ironic that this spectacular landscape was created by violent, geologic and hydrological events and it's just not very handy when it happens while we're all here settled on it," Park County Commissioner Bill Berg said.

Park officials evacuated at least 10,000 people. And now, there is a big question as to when it can fully open again.

"Those road conditions are extremely dangerous and unstable. Remember, it's mid June in Yellowstone National Park. Not only that — the park was full of visitors," Yellowstone Commissioner Cam Sholly said. "Million dollar question is: What's the damage? Answer is: We don't know exactly yet. Water is extremely high. We're not putting teams in harm's way at this point. Things that we're going to need to do to stabilize once the water comes down [is] assess what the full damages and the length of that corridor, but also with the right people assessing whether it makes sense to build here in the future."

Videos are making it clear that the northern loop of the park will not reopen this year.

The park hosted a record 938,000 visitors in June of 2021. Gateway towns that rely on those visitors are now cleaning up and worrying about their future.

"The park is our livelihood and now we're not going to be able to access it for who knows how long. We don't know what's going to happen," Gardiner resident Michelle Holihan said.

The superintendent says they’re focused on getting the southern portion reopened, but that brings its own challenges.

"Their business projections are shot. Reservations are being canceled. Folks are asking for refunds, which is understandable. Some businesses may have already spent that money so they're looking to try to figure out how to hold things together," Berg said.

The park has had multiple wastewater treatment facility failures and those need to be fully functioning first.

"One thing that we definitely know is that half the park cannot support all of the visitation. We are exploring a range of options, including some time to entry potential reservation type systems that we would look to implement when the south loop is is safe to open," Sholly said. "You know, when you take on something like this... it's not a light switch we can't just flip it ."

The flooding may not be over. The park superintendent says with warming temperatures and some possible precipitation there could be more flooding in the next 4-5 days.