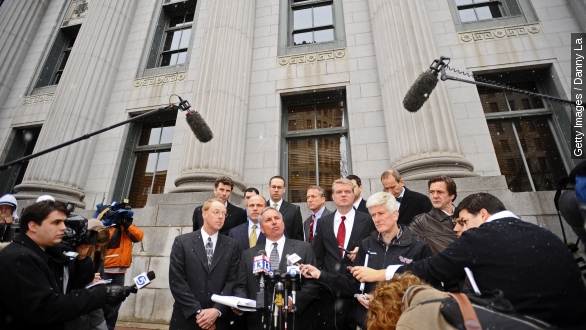 Monday, one of the most high-profile criminal cases to come out of the Iraq War ended with three former Blackwater security contractors sentenced to 30 years in prison and another sentenced to life for a 2007 mass shooting that left 17 Iraqi civilians dead.

Prosecutors say the four men opened fire unprovoked at a busy intersection, using rifles and grenade launchers indiscriminately. The men have long maintained that they were attacked at the intersection and the civilians were unfortunately caught in the crossfire. (Video via The New York Times)

All four were convicted last fall, with three of the men found guilty on manslaughter and weapons charges and the fourth found guilty of murder for firing the first fatal shot. (Video via CNN)

It's likely the men will challenge their convictions. Even before the sentencing, lawyers for the men accused the prosecution of being "vindictive" and said the charges were politically motivated.

And the case has seen its share of political turmoil. Charges were brought against the men in 2008 only to be dismissed and reopened over the next several years. A report from The New York Times said internal emails show many at the Justice Department were uncomfortable with the charges and may have intentionally delayed the case until the Obama administration took over. (Video via C-SPAN)

The case also brought up the tricky question of jurisdiction. Private contractors like Blackwater, who were hired for diplomatic security and not combat missions, don't fit easily within the existing legal framework, which could give the men's lawyers another opportunity to challenge the verdict.