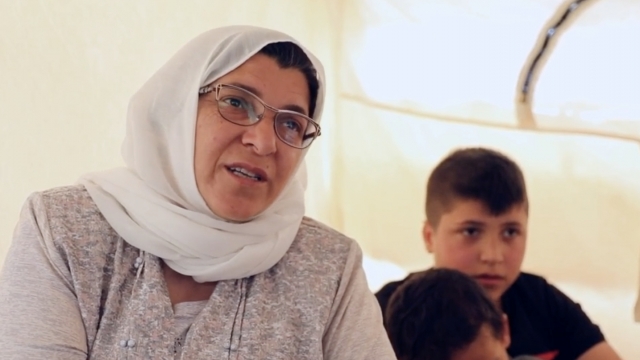 A Yazidi woman and her children are fleeing violence and hoping a refugee camp in Northern Iraq can finally offer some safety.

The U.N. estimates 200,000 people have fled their homes in northeastern Syria in the past month. Among them are the Yazidis, who say the Turkish operation is just the latest blow to their already shrinking minority.

For two years, Hamida Khelo Hemsoro, who is Yazidi, ran from city to city in Syria. Now, she's in a refugee camp in Northern Iraq.“When Turkey attacked Afrin, we went to Shahba, then to Aleppo. But the trip wasn’t day by day. It took two years. Then we went to Damascus. Then we went to Qamishli. Then here,” Hemsoro said. “I was afraid for my kids that they would rape my daughter or kidnap my son for ransom. I was too afraid for my kids. Because of that, I took the risk and came this way.”

In March of 2018, Hamida Hemsoro was living with her family in Afrin when Turkey launched a two month long offensive on the mostly Kurdish town. Rights organizations accused Turkish-backed armed groups in Afrin of serious human rights violations, including torture, arbitrary arrests and pressuring Yazidis to convert to Islam. "It was really terrifying. You can't imagine." Hemsoro recalls: "we were afraid to sleep if the door opened. We locked every door."So she packed her bags and fled south to regime-held Aleppo and Damascus. But once there, a group of men beat her son for being Yazidi. He still has the scars on his legs from the beatings. "They were injuring him by glass and they heated a spoon and put it on his body. They burned him with cigarettes. And the reason is 'you are faithless, you don't know God, you don't fast, you don't pray.'"The Yazidis have a long history of persecution in 2014 ISIS invaded their ancestral homeland of Sinjar in Northern Iraq. People are familiar with the genocide of the Yazidis in Iraq, but maybe less familiar with who the Yazidis are in Syria.