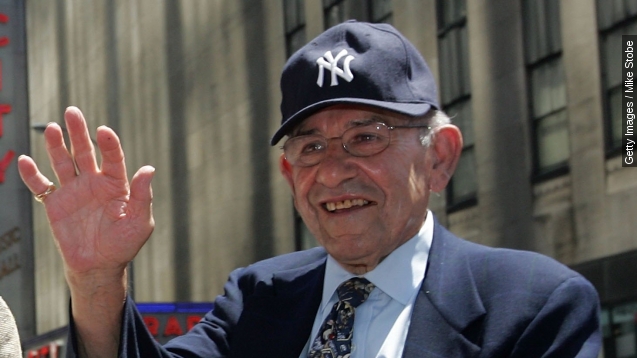 The Yankees catcher was a 15-time All Star, 10-time World Series champion and three-time league MVP. He was inducted into the Hall of Fame in 1972.

The Yogi Berra Museum made the announcement late Tuesday with the Yankees organization confirming it later saying, "We are deeply saddened by the loss of a Yankees legend and American hero, Yogi Berra." (Video via NJTV)

Berra was nothing short of an MLB legend. His baseball career started in 1943 with the Norfolk Tars, but was put on hold at the start of World War II. Berra enlisted in the Navy and later returned to baseball in 1946.

And by the time his career was done, the catcher was a 15-time All Star, 10-time World Series champion and three-time league MVP. He was inducted into the baseball Hall of Fame in 1972.

And as much of a character as he was on the field, he was just as much off of it.

His way with words inspired the term "Yogisms," also know as taking the long, repetitive form of describing something.

"And it's less filling than it would've been if it was more filling than they didn't want it to be," Berra said in a Miller Lite commercial.

This video includes images from Getty Images and Rubenstein  / CC BY 2.0.