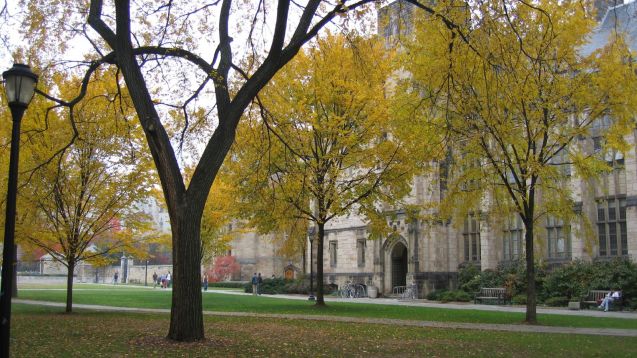 Yale University students marched in protest of what some call "systemic racism on campus."

The same day University of Missouri System President Tim Wolfe resigned amid accusations of mishandling acts of racism, students at Yale University marched in protest of racist issues on their own campus. (Video via WTIC)

Students called it the "March of Resilience" and said their goal is to create a more inclusive campus. (Video via WFSB)

Recent events at the Ivy League school have caused some to feel as if the campus is anything but inclusive. There are two recent incidents that some say caused a tipping point.

One incident involved a fraternity on campus, which was accused of hosting a "white girls only" party over Halloween weekend. The fraternity has denied those claims.

And prior to Halloween, Yale's Intercultural Affairs Committee sent out an email warning students to be sensitive and thoughtful when choosing how to dress up for the holiday. (Video via Yale University)

No problem here. Lots of universities send out reminders on why a blackface or turban costume might be offensive. What did grab national headlines was how one lecturer responded by sending out a counter-email.

Her email reads in part, "Is there no room anymore for a child or young person to be a little obnoxious ... a little bit inappropriate or provocative or, yes, offensive?"

That letter sparked some backlash. More than 740 Yale students signed an open letter criticizing the lecturer for downplaying racial sensitivities.

Still other students say Monday's march of more than 1,000 people was fueled by much more than these two incidents. (Video via WVIT)

In a piece for The Huffington Post, a senior Yale student wrote: "In the petty debates about these two specific incidents, people have lost sight of the larger issue: systemic racism on campus. There's absolutely no reason why we can't acknowledge both the value of free speech and the reality of the prejudice that students of color face every day."

Yale's president has told students "we failed you" and that they will work "to make this place better."