Xtreme Eating: Your Daily Caloric Intake All On One Plate 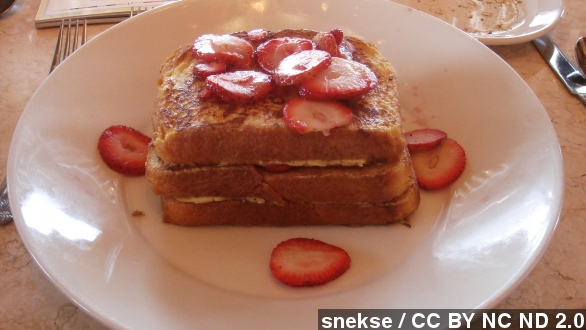 Get ready for some numbers that might make you cringe.

Consumer watchdog group the Center for Science in the Public Interest released its Xtreme Eating list of meals or food choices from chain restaurants that either hit or get close to 2,000 calories.

Why is 2,000 calories a significant number? Well, health officials recommend that adult men consume between 2,000 and 3,200 calories daily — a number that varies with age and how active they are. For adult women, the recommended daily caloric intake ranges from 1,600 to 2,400. (Via U.S. Department of Agriculture)

These next dishes push that limit by fitting the daily number of calories into a dish.

Here's the lineup: First, Chevy's Super Cinco Combo, which, according to the menu, consists of two enchiladas, a crispy or soft beef taco, a pork tamale and a chile relleno.

Next is Red Robin's Monster Burger, which comes with bottomless steak fries.

After that is Famous Dave's dish called The Big Slab, which offers you ribs, cornbread and two side options.

And last but not least in the calorie count is The Cheesecake's Factory's French Toast Napoleon.

So let's do some comparing to put these dishes into perspective. What better way than to use McDonald's Big Mac for some scale? It's listed at 530 calories, and if that number frightens you, brace yourself.

​According to the group, Chevy's Super Cinco Combo has about 1,920 calories, or around three and a half Big Macs' worth.

Red Robin's Monster Burger with one side of fries has an estimated 2,040 calories. You'd have to eat almost four Big Macs to reach that monster number.

If you order the 9-inch Signature Deep Dish Chicken Bacon Ranch Pizza from BJ's Restaurant and Brewhouse, you're about to consume 2,160 calories ... or about four Big Macs.

At Famous Dave's, if you choose fries and baked beans with your Big Slab order, you're talking about 2,770 calories … or about five Big Macs.

Finally, The Cheesecake Factory's French Toast Napoleon has 2,900 calories, which equals the calories in about five and a half Big Macs.

The Center for Science in the Public Interest said this year's list is particularly unique because most of the "winners" exceeded the 2,000-calorie mark. When the Xtreme Eating awards were first handed out in 2007, the Center wrote, "We were shocked to see 1,500-calorie entrées."

Although the nutritional value of these meals are pretty much nonexistent, the health care reform law signed in 2010 by President Obama could soon help you identify which foods you'd want to stay away from ... or just totally gorge on. (Via Getty Images, Getty Images)

The law — which will require restaurants with at least 20 locations to display calorie counts on menus — is being finalized by the Food and Drug Administration and the White House.