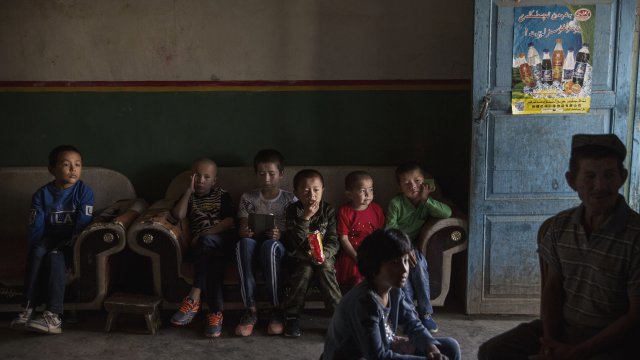 China is reportedly separating Uighur kids from their families and treating them as orphans, according to documents reviewed by the BBC.

Uighurs are a large Muslim minority group who have lived in Xinjiang for centuries. China's been cracking down on Uighur communities since 2009 -- they have faced constant surveillance, the possibility of arrest, and harassment from the government.

According to the report, the Chinese government is placing children into similar confinement as the 1 million estimated Uighur adults who are believed to be in internment camps. China calls them “re-education camps,” saying they help fight against extremism and terrorism.

The government began placing adults in re-education camps over the last two years. The children left behind are then being placed into what the Chinese government describes as boarding schools and kindergartens.

The government says the boarding schools are created to help "maintain social stability and peace" with the "school taking the place of the parents."

This has caused suspicions that the Chinese government's plan all along was for the state to step in as a de facto foster care system. Human rights groups say these boarding schools are the latest example of how China is systematically distancing young Muslims in Xinjiang from their families and culture.

Uighurs say the separation is essentially wiping out their ethnic identity, one child at a time.

And the United States seems to agree. The U.S. Congressional-Executive Commission on China describes it as "the largest mass incarceration of a minority population in the world today."