'X-Men' Poster Shows How Tone-Deaf Hollywood Can Be 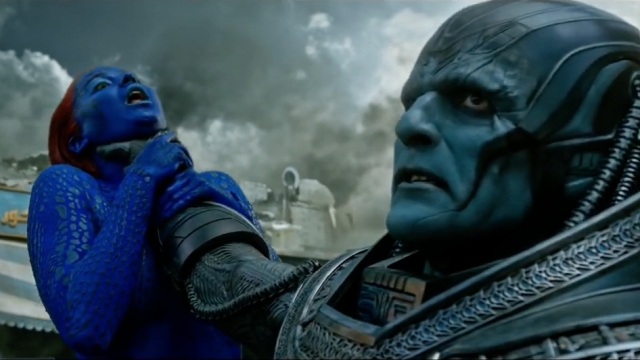 "X-Men: Apocalypse" is storming its way through the box office, but a questionable marketing choice has captured the ire of the internet.

20th Century Fox has apologized for a movie poster portraying this scene. In the poster, the movie's namesake and main villain has Mystique in a chokehold. Some say it promotes violence against women.

One critic called it "tone deaf as hell." Another added: "It's gratuitous, it's offensive in completely useless ways. Offensive isn't always necessarily bad, but this is offensive in ways that serve absolutely no purpose, and while it does depict a scene from the actual film, it's also a terrible representation of the movie as a whole."

For its part, 20th Century Fox says it "didn't recognize the upsetting connotation" of the poster and "would never condone violence against women."

It's not completely implausible. Maybe the studio just wanted to demonstrate how strong Apocalypse is by showing him overpowering arguably the most badass mutant in the movie. And the treatment of not just Mystique but women in general hasn't been terrible in the "X-Men" movies. They're usually portrayed as the equals, if not the betters, of the men in the series.

The issue doesn't seem to be the violence in the movie itself but instead the images the studio chooses to market and the impact those images can have outside the context of the films.

Not everyone's convinced of the critiques. One blogger for Reason said the image isn't "saying violence against women is good. It's not supporting or promoting it. Violence is something the villain of the film is doing. Bad guys, like Apocalypse, hurt women. Hurting women is evil. That's it."

Either way, it seems 20th Century Fox has learned its lesson. It says it "quickly took steps to remove" the materials.