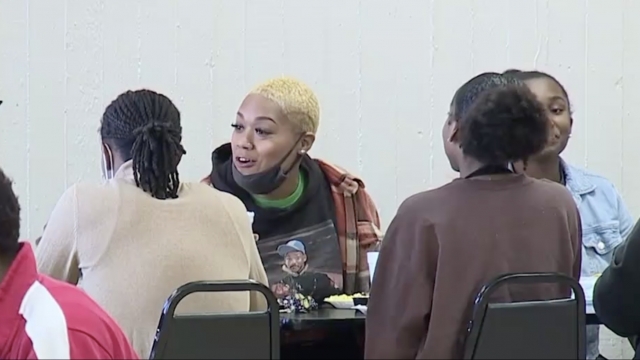 As President Elfred Anthony Pinkard puts it, when it was founded, even the idea of it was…

"That was social disruption," Pinkard said. "That was audacious."

In 1856, people of African descent were still enslaved in the American South.

"And yet there were a group of people of good will — both Black people and White people, it's important to note, who imagined a great university occurring in this area and went about to establish that," Pinkard said.

Powerful names have walked the halls there, including Violet T. Lewis, who founded Michigan's first and only HBCU, reopening this spring.

For years Michiganders seeking a traditional HBCU experience had Wilberforce or nearby Central State as their closest options.

Of this fall's nearly 600 students, 116 are from Michigan, 57 from the city of Detroit, like a member of Wilberforce's royal court, Rickell Gipson.

She was drawn to Wilberforce in high school by current students who shared their experiences on social media.

WILBERFORCE MISS SOPHOMORE RICKELL GIPSON: Ever since I got here, they've literally become my family.

7 ACTION NEWS' JENN SCHANZ: So you knew right away an HBCU was something that was important to you?

SCHANZ: Why? Walk me through that.

GIPSON: The history of them. I feel like right now with everything going on in the world, especially with the Black Lives Matter movement, it was a major deal for me to go somewhere where my Blackness is celebrated constantly.

Extracurriculars like the royal court are a huge part of the HBCU experience.

But as student body vice president Alexander Murphy, also from Detroit, points out, what happens in the classroom also sets HBCUs apart.

"Being able to communicate and connect and learn from someone who looks like you, that's completely unmatched because it's a lot deeper than paper, deeper than academics," he said.

Sadly this month, more than a dozen HBCUs around the country have received bomb threats. Pinkard says that's just the world we live in.

This story was originally published by Jenn Schanz on WXYZ.com.