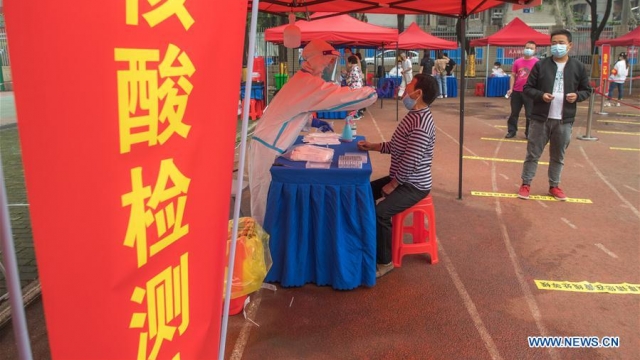 Chinese state media is reporting that health officials in Wuhan have tested more than 3 million residents for COVID-19 since April. And they're ramping up testing even more this week, with a goal of reaching the rest of its 11 million population over less than two weeks.

Wuhan was the original center of the COVID-19 pandemic. It had stopped seeing new cases for over a month, but recently it's counted new cases every day.

Reuters reports that every district in the city was asked to submit a detailed testing plan this week for their area. The idea is that complete testing will allow officials to identify and quarantine asymptomatic cases so healthy people are safe to go back to work and school.

Health officials are reportedly conducting nucleic acid testing, which detects the genetic code of the virus. According to CNN, this testing can be more effective at determining infection than tests that look at a body's immune response.