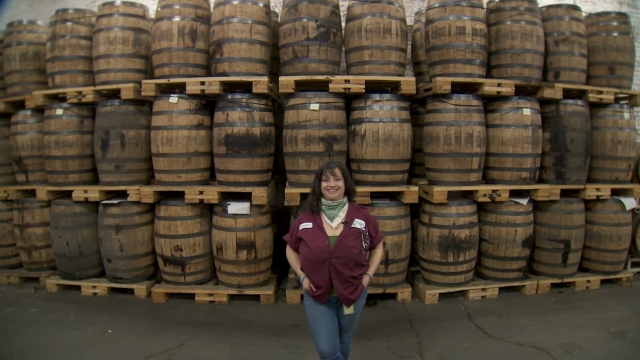 It is the first day of Women's History Month, but there's a place in Marathon Village where every day acknowledges the role women played in its past and in its present.

Meet some of the team: Jessica Vasquez, Mary Anne Morris, senior bottling operator Cecily Woods, and bottling supervisor Michelle Brown are all part of the bottling crew at Nelson's Green Brier Distillery. There was a time it was out of the norm to see so many women working a bottling line at once.

"Maybe it wasn't a role in the past that females typically occupied, but there's been this huge influx of females in the industry," said Brown. "Half of our team is female bottlers."

"I just come from a line of strong, resilient women," added Vasquez. "My grandmother worked on planes. She was one of those Rosie the Riveter gals."

The crew's main motivator can be seen on a large mural on the side of a wall: Louisa Nelson.

"The distillery was originally open and ran by Charles Nelson, but on his passing, Louisa was the one who took over the business," Brown explained. "She kept it going, kept it flourishing."

Were there very many women running distilleries at that time?

"You couldn't even vote!" added Morris.

"She didn't let that get in her way," said Vasquez.

"We see her out of the corner of our eye," said Brown, referring to the mural that overlooks the bottling area. "Louisa's watching! We gotta meet her standards!"

Every year, the distillery holds the Louisa Nelson Awards where three women in the community are honored for showing that same kind of strength Nelson showed in carrying on her business.

"She was one of the first women to do that," said Woods.

So, what would Nelson think of so many women being part of the bottling line today, in addition to women running the majority of the departments and marketing?

"I think she would have been proud," said Morris.

"We're following in her footsteps," Woods continued. "I think she makes us stronger women. It's kinda nice having her watch over us."

This story was originally published by Forrest Sanders on newschannel5.com.